Being a doctor out in rural areas is the most common form of medical practice. The 1950s and 1960s saw a sea change in the medical profession with the construction of hospitals, specialisation and scientific advances. This resulted in a loss of status for the traditional rural doctors, and a risk of a shortage of doctors throughout the country. The University provided the solution. 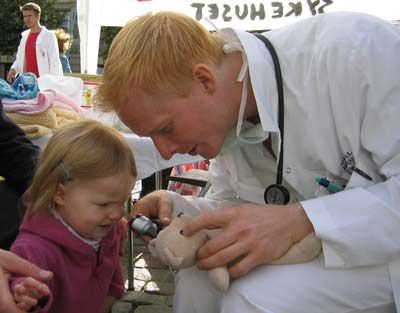 Training general practitioners was the top priority when the Faculty of Medicine was established at the new Norwegian university in 1813. Everyday practice for doctors in the nineteenth century consisted of seeing patients for the treatment and relief of disease, injuries and wounds. Another key area of work was infectious diseases – at that time they did not know how they spread. Illness and death were largely accepted as a natural part of life in those days, and doctors were not considered a necessity, as they are today. When teaching in medicine started, there were only about 100 doctors in Norway.

Early milestone at the Faculty

1824 saw an early milestone in medicine as an academic discipline: Norway got its first professor of hygiene, introducing a distinction between patient-oriented activities and public health work. The hospital service was in its infancy, and specialists were virtually non-existent.

Tough out in the real world

Until the system of internships was introduced in 1954, newly educated medical professionals were thrown into practice without much clinical experience at all. Many young doctors struggled with their new reality as a rural medical officer. Suddenly they found themselves alone with sole responsibility for very many people and all kinds of diseases, and often very far off the beaten track.

Until the 1950s, being a general practitioner was not regarded as having any scientific or academic foundation and was therefore not considered a separate university discipline. This led to ever fewer medical students choosing to become general practitioners. Young medical graduates wanted to work in hospitals, either as a researcher or a doctor. Hospitals were being built at break-neck speed, leading to increased specialisation and huge advances in medical knowledge. In 1953, a staggering 45% of Norwegian doctors were employed in hospitals.

The medical community acknowledged the critical situation for general practitioners and set out to find a solution. The Norwegian Medical Association stepped in. First, in 1965, they established medical assistance and pension schemes for rural medical officers. These schemes provided peace of mind and security. In 1967, they improved further and continuing education offerings.

Establishment of the Department of General Medicine

The biggest change, however, came in 1968, with the opening of the Department of General Medicine at the University of Oslo. In his speech at the opening ceremony, the president of the Norwegian Medical Association, professor Martin Seip, said that this was a historic day for Norwegian and Nordic medicine. The department was the first of its kind in the Nordic region and one of the first in the world. Organising general medicine as an independent academic subject would raise the status of general practitioners, according to Seip. The goal was for to bring practitioners and academics together with mutual respect.

Funded by the Norwegian Medical Association

The establishment of the Department was funded by the Norwegian Medical Association with a five-year endowed professorship, fully equipped premises, and funds for equipment and operations. The Department was given premises on the ground floor of the Red Cross Clinic’s former home for nurses. In 1969, internist Christian Fredrik Borchgrevink became the University’s first professor of general medicine and got straight down to the business of building up the department. He stayed at the department until he retired in 1994.

Not only the Norwegian Medical Association, but also the unions and health authorities wanted to improve the general health service and campaigned for the establishment of the Department.

In tune with the spirit of the times

General medicine thus became a university subject in 1968 and immediately grew rapidly. It is widely held that this was related to the spirit of the times, with radical students, anti-authoritarian attitudes and a move towards decentralisation. In the idealistic late 1960s, students held that they were there to serve the people. Rural medical officers certainly lived up to this ideal. Suddenly it was “in” not to go into the hospital system. Instead of pursuing a career in hospitals, medical graduates wanted to be out among the ordinary people.

The 1970s saw continued growth in the status of general medicine as an academic field. Departments opened in Bergen, Tromsø and Trondheim. In 1974, these four institutes established a common medical research committee, together with the Norwegian Association of General Practitioners and the Norwegian Association of Public Health Medicine. However, the Norwegian Medical Association’s central board did not agree to make general medicine a medical speciality until 1985. There had been strong opposition, not least from hospital doctors. The 1980s was a golden age for general practitioners, with reforms and improvements: increased recruitment, new self-respect and higher prestige.