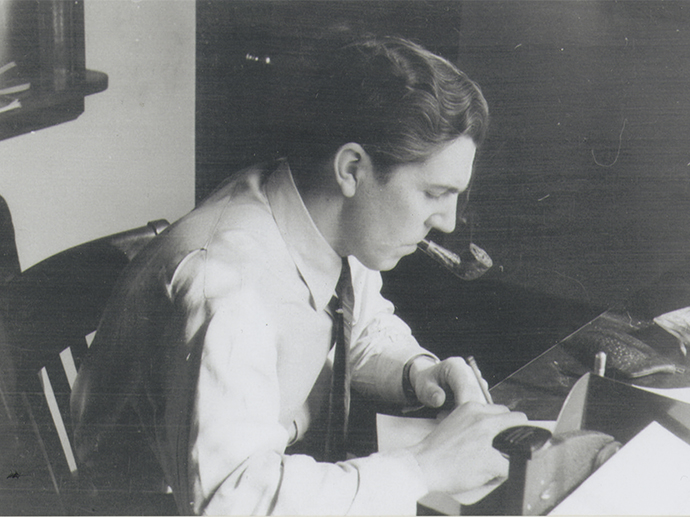 Haavelmo in deep concentration. From his time at the University of Chicago 1947. Unknown photographer.

Trygve Magnus Haavelmo was awarded the Sveriges Riksbank Prize in Economic Sciences in Memory of Alfred Nobel at the age of 78 years. The Royal Swedish Academy of Sciences awarded him the prize for his fundamental contribution to econometrics. Econometrics is concerned with trying to find correlations between economic data, with a view to both describing and understanding the current economic situation and making economic forecasts.

From Skedsmo to the University

Haavelmo was born in 1911 in Skedsmo outside Kristiania, as Oslo was called at the time. His father was a teacher. After the capital of Norway reverted to its old name of Oslo, Trygve Haavelmo enrolled at the Cathedral School in the city. He took his Examen Artium in 1930. Three years later he obtained a cand. oecon degree at the Royal Frederick University, which changed its name to the University of Oslo in 1939. Haavelmo specialised in government Finance.

Ragnar Frisch, who would later become the first Norwegian to win a Nobel prize in economics, had established the University Institute of Economics in 1932. Between 1933 and 1938, Haavelmo was a research assistant at the Institute, which at that time was still in the university buildings in the centre of Oslo. His close contact with Ragnar Frisch, first as a student and then as an assistant, was pivotal for his subsequent research career.

Research fellow in the USA

After teaching statistics at Aarhus University between 1938 and 1939, Haavelmo received an international research scholarship and went to the United States. As a Rockefeller Fellow, he was given the opportunity to study with the world-famous statistician Jerzy Neyman for a few months. In his speech at the Nobel Prize ceremony five decades later, Haavelmo described how Neyman set him a number of exercises in econometrics that almost made him give up the idea of pursuing a career in economics. Neyman then pointed out to him that there were always alternative ways to approach a task, in addition to the familiar and accepted methods. This lesson would characterise Haavelmo’s approach in the future and contributed to the development of his critical sense that he would later become so famous for.

The world situation meant Haavelmo ended up staying in the USA for much longer than originally planned. Between 1942 and 1944, Haavelmo worked on statistics in New York. In 1945, he became a commercial attaché at the Norwegian Embassy in Washington. The following year he was invited to join the Cowles Foundation at the University of Chicago. Here Haavelmo worked with internationally leading researchers in econometrics, statistics and mathematics.

Haavelmo’s major scientific breakthrough came with his thesis “The Probability Approach in Econometrics” (1944), in which he pointed out that many of the economic theories at the time had to be misleading, because they did not take adequate account of all the economic factors that affect the actual economic development. In his thesis, he applied methods from mathematical statistics in economic analysis, laying the foundation for a brand new area within economic research.

In 1946, Haavelmo was awarded a PhD from the University of Oslo. It was time to return home.

Chief of Section at the Ministry of Commerce and Industry

Profession: Professor of economics and statistics

A professorship had been established at the Department of Economics in Oslo, and Haavelmo was a leading candidate for the position. While he was waiting for a final decision, he was persuaded to take a temporary position as chief of section at the Norwegian Ministry of Commerce and Industry. The result was the national budget for 1948, presented in January of that year, which was probably heavily influenced by Haavelmo. The national budget has since become a permanent component of Norway’s economic policy and is an important programme document and policy instrument.

Professor at the University of Oslo

Haavelmo worked at the University until he reached retirement age and was made a professor emeritus in 1979. When he received the professorship in economics in 1948, Norway was still recovering from the war years. Haavelmo’s work as a researcher and lecturer meant he had an enormous impact in post-war Norway, and he remained an influential figure in economics well into his retirement. His teaching was always topical and research-based, and Haavelmo had a strong influence on students and practising economists alike. With time, the focus of his research shifted from econometrics to economic theory. He was interested in developing economies and was an early critic of the consumer culture in rich, industrial countries, not least from an environmental economic perspective.

The prize that Trygve Haavelmo received in 1989, “the Sveriges Riksbank Prize in Economic Sciences in Memory of Alfred Nobel”, had been created twenty years earlier. It is awarded at the same time as the other Nobel Prizes and has the same status as the original Nobel Prize categories.
In an interview with the Norwegian daily newspaper Aftenposten in connection with the award, Haavelmo stated that he would have preferred not to have been given the prize, but that it would be very bad manners not to accept the recognition. Haavelmo was very reluctant to talk to the press about his personal life and was uncomfortable with the publicity the prize brought, describing himself as “a tad contrary” at times. In his younger years, he was famous for heading out on fishing trips on his Harley-Davidson. His love of fishing lasted his whole life, and it was said that no one knew as much about trout as the economics professor.