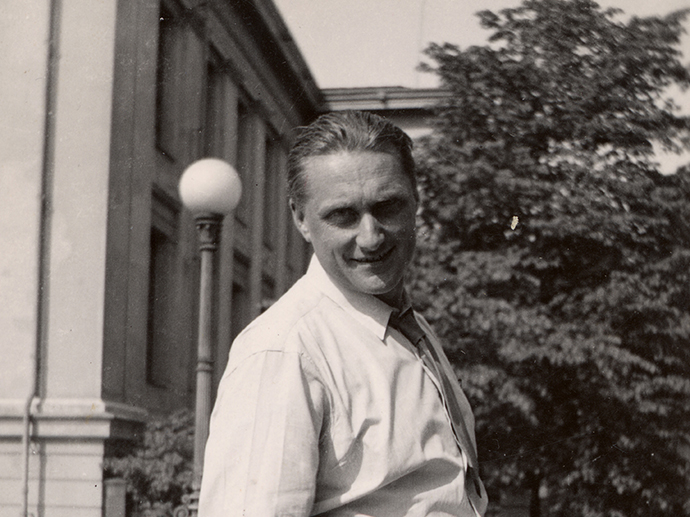 According to Ragnar Frisch himself, it was sheer chance that led him to study economics. The future Nobel Prize winner came from a long line of goldsmiths. He completed his apprenticeship at the internationally renowned goldsmith company David-Andersen in Oslo. However, his mother thought that a university education would provide more opportunities. In an autobiographical text, originally written for the book series “Les Prix Nobel”, Frisch later described how he and his mother had perused the University’s catalogue of studies together. He picked economics because it appeared to be the “shortest and easiest study”.

Ragnar Frisch was critical of established methods and established truths within the field of economics. It is claimed that in examination assignments he criticised the teachers who would be marking the papers. Having completed his cand. oecon. degree in 1919 at the Royal Frederick University (now the University of Oslo), Frisch went overseas to continue his studies in economics and mathematics. From 1920, he spent time in Germany, the United Kingdom, the United States, Italy and France, where he studied for three years. Frisch later called France his second home. After returning to Oslo, he completed his PhD in 1926 with a project on mathematical statistics.

Employed at the University, new department

The previous year, he had been given a position at the University, and in 1928, Frisch was promoted to associate professor. In 1931 he was awarded a professorship in economics, created by the Storting. At this time, the University did not yet have a separate economics department. Ragnar Frisch played a key role in this work. The University’s Economic Institute, later renamed the Department of Economics, was established in 1932. The Rockefeller Foundation had donated funds for the establishment of the new unit, which started out as a pure research institute. Frisch was the director of research at the newly founded Economic Institute. He initiated a drastic overhaul of the subject, ending up with a six-year university programme.

Frisch argued that the economics had come to rely too heavily on literary traditions and that it ought instead to be closely affiliated with the natural sciences. Economists had become too subjective. Frisch held that research in economics ought to adhere to the same standards of objectivity as the natural sciences, and that theses must be verifiable. The solution was mathematical and axiomatic evidence, combined with empirical research.

The Great Depression of the 1930s rocked the economy worldwide. Times were difficult in Norway too. During the economic downturn of the 1930s, Ragnar Frisch was among the first economists in the world to advocate an active economic policy of growth. This meant stimulating demand in society by increasing the state’s level of activity. The theory entailed increased government spending. These are now established socio-economic principles, but in the 1930s, this method was highly controversial. Frisch’s most important findings were that there is a regularity in the fluctuations of the economic factors, and that there was a temporal lag between the three components in the business cycle (stock exchange rates, prices and production, and central bank interest rates). Cycles of varying lengths could thus be detected on the basis of variables such as inventories, production and investments, and fluctuations in population numbers. Frisch was also interested in the influence of technological developments on the economy.

During the war, Frisch worked on new accounting methods for the Norwegian national accounts. His former student, assistant, and future colleague and Nobel laureate Trygve Haavelmo continued the methods in the preparation of the first Norwegian national budget after the war. His interest in government finances developed into a strong commitment to developing countries.

After the war, Ragnar Frisch concentrated on developing economic models that are still used in economic planning today. He was a key player in the development of economics as an academic discipline and was known to lecture for up to eight hours straight. His academic work in the 1930s was the main reason he was awarded “the Sveriges Riksbank Prize in Economic Sciences in Memory of Alfred Nobel” in 1969. The prize was awarded for the first time that year and has the same status as the original Nobel Prize categories. Frisch shared the prize with Jan Tinbergen from the Netherlands. His commitment to helping developing countries and work as an international economic expert were also central reasons for awarding the prize in economics to Ragnar Frisch. In his speech to the Nobel committee, Frisch focused on his family, his faith in God and love of nature.