The University of Oslo’s Physics Cabinet is something of an Aladdin’s cave, with talking gas flames, gyroscopes, spherometers, and Magdeburg hemispheres, to name but a few.  Large parts of the old teaching collection are now on display at the Department of Physics. 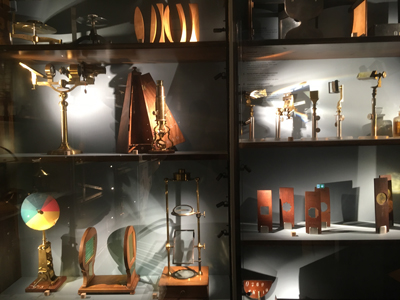 The Physics Cabinet was the original name of the Department of Physics. When the University was founded in 1811, many universities and scholars had these kinds of cabinets – collections of instruments that were neatly displayed in cabinets or small rooms.

The instruments were often rare, hand-crafted pieces that illustrated known physical principles. A physics cabinet was a symbol of progress and enlightenment – the very ideals that the young university was striving for.

Jac. Keyser was the University’s first professor of both physics and chemistry. He had a physics cabinet and chemical laboratory fitted out in Kvadraturen in the centre of Kristiania, as Oslo was called at that time. For several decades, the instrument collection was open to the public every Monday from ten to twelve.

Cabinet in the gallery

A number of these old instruments are now on display In the Department of Physics’ learning centre “Entropia”. Until recently, the premises were a departmental library, with a book gallery.

Collecting instruments was an important priority for the first professors of physics. In 1815, Keyser bought the remains of the collection of the recently deceased astronomer Thomas Bugge at an auction in Copenhagen. The Cabinet also inherited instruments from the Kongsberg School of Mines that closed down when the University was established. Over the years, the collection was supplemented with purchases from well-known European instrument makers.

In 1859, professor Hartvig Christie compiled a systematic catalogue of the collection. In line with international developments in physics, he organised the instruments into the categories of acoustics, electricity, magnetism, mechanics, meteorology, optics and heat. Christie also wrote a textbook based on the same division into disciplines. In the exhibition, the objects are still grouped according to Christie’s categories. This reflects the teaching in the second half of the nineteenth century.

Throughout the entire nineteenth century, physics was included in the university entrance examination the “Examen Philosophicum”. Physics was regarded as an essential element of the general education that all students were to get. The physics auditorium was thus full of students. Many had no greater ambition than to pass the entrance exam, in order to get started on one of the profession-oriented degree programmes in law, theology and medicine. There was little on offer for students who were interest in the natural sciences beyond this level.

It was only when teacher training in the natural sciences was introduced in 1850 that it was possible to study physics at a higher level. Natural science suddenly became a career choice. Students learned theory and exercises they could use as upper secondary school teachers.

The instruments were used in demonstrations led by the professor and were thus a central part of the teaching. Professor Keyser had a notoriously short temper and would often blame his assistant when the experiments went wrong.

In the early twentieth century, large demonstration collections went out of fashion. It was considered more important that the students did the experiments themselves using standardised equipment. In the 1920s, it became customary that students at second-degree (“hovedfag”) level did research work as part of their degree. The instruments from this era were less elaborate than the old demonstration instruments, but more practical for experiments.

At the beginning of the twentieth century, Norway was a world leader in geophysical research. Our foremost physicists studied natural phenomena such as the Northern Lights, ocean currents and weather.

Laboratory research at the Department of Physics became more consistently organised in the interwar period, inspired by German and British institutions. In 1935, the Department moved into a new building at Blindern. This paved the way for the emergence of several new research environments, including a nuclear laboratory with a Van de Graaff generator. This was in operation until the 1970s, when it was replaced by a more modern cyclotron.

Today, the Department is engaged in many extensive research projects, both alone and in large, international partnerships.

Otto Øgrim and Helmut Ormestad popularised physics through entertainment. The duo started out with a radio show in 1949, which was followed by a television series called “Physics in the messy room”. At this time, the Norwegian national broadcasting company Norsk Rikskringkasting had a monopoly on television and radio broadcasting in Norway, meaning the shows reached a large audience. Øgrim and Ormestad explained physics phenomena using everyday items and straightforward language. They also followed these same principles in their teaching at the Department of Physics and in the textbooks they wrote.

Øgrim and Ormestad were part of the group behind the establishment of the “School Laboratory” scheme that aimed to form closer ties between the University and schools and act as an incubator for new ideas in science teaching.

Details from the Physics Collection

Visit the exhibition at the Department of Physics, in the Entropia learning centre (level 1 of the West Wing).

Please show consideration if there is teaching in progress.