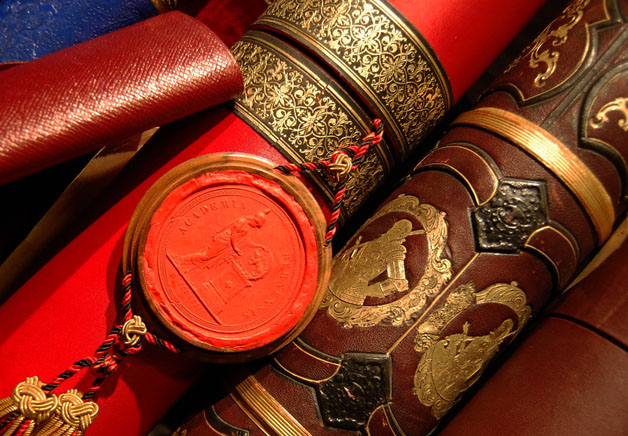 The addresses were presented in beautiful packaging, and many were decorated with an official seal. Photo: Kine S. Ottersen.

Karl Johans gate, Oslo’s main boulevard, was decked out for a celebration of national importance. Flags swayed in the breeze. The scent of spruce from the green garlands mingled with the smells of the city. Flower arrangements depicting the national coat of arms and the University’s seal adorned the flagpoles. A procession of men in uniforms, robes, morning dress and top hats crossed the University Square. A film camera whirred. Hundreds of spectators lined the street as the procession made its way into the new Aula – the University’s main hall.

Addresses from far and wide

Every single university and scientific academy around the world had been invited to the centennial celebrations. 140 delegates attended the week-long festivities in Norway’s capital.
With them in their suitcases and travel bags they had “addresses” – formal written messages of congratulation in elegant covers, boxes or casings. Addresses and telegrams were also sent from around the globe. In total, more than two hundred messages of congratulation were received.

Shortly after the centennial week in 1911, the Norwegian Museum of Decorative Arts and Design (“Kunstindustrimuseet”) in Kristiania arranged an exhibition of the addresses, as prime examples of printing, bookbinding, calligraphy and handicrafts from around the world. The reviews were very positive. The newspaper Aftenposten wrote that it was “an unusually interesting collection of attractive greetings of high artistic calibre”, while the newspaper Morgenbladet stated that visitors to the exhibition would “be ensured full satisfaction of our national vanity by reading so many beautiful words in so many different languages”. The conclusion was that the University had received an important addition to its collections.

Roots in the Middle Ages

Sending or presenting addresses had become a standard way of showing respect at important occasions. However, this tradition, in the modern sense, was not so old in 1911.
It was rooted in the British Arts and Crafts movement, which from the 1850s had worked to counteract a perceived decline in standards in art and design in the industrial era. Along with Asian art, the Middle Ages were the movement’s main source of inspiration. Artists studied ornate, handmade mediaeval books and manuscripts, many of which were illuminated with gold and silver gilding, initials, illustrations and other ornamentation. There was a renewed interest in the art of book making and calligraphy.

Calligraphy was an integral part of the artistic expression in mediaeval manuscripts, and resurfaced as an ideal in the late nineteenth century. Naturally, calligraphy was reserved for small, individual works. At the same time, texts could also be printed with high artistic value, with the printing plates set by hand as a result of an artistic process. Printing techniques and hand work could also be combined in a single document. We find examples of all of these variations in the addresses that found their way to Kristiania in 1911. Many of these addresses were characterised by contemporary design, generally combined with historical motifs.

What did the addresses say?

The addresses in the collection are in Latin and other languages. They are characterised by unreserved praise of the Norwegian university. In practice, most of the lofty formulations were taken from an international repertoire of academic stock phrases. This was an era with frequent anniversaries around the world, all of which had to be marked. Some senders went to the effort of writing a more personal greeting, requiring that they found out about the history or activities of the institution being celebrated. In 1911, much was made of the role that the University had played in Norway’s nation-building. Its significance as a national cultural institution was another popular topic. Famous University scholars such as Christopher Hansteen, Niels Henrik Abel and Sophus Lie were frequently mentioned.

The commemorative addresses were all on expensive paper or parchment. Many were bound with fancy cord and placed inside covers. Others consisted of single sheets rolled up like a scroll. Different countries tended to have different traditions. For example, German addresses are often printed and feature high quality hand-setting – perhaps paying homage to Germany’s long tradition of typography? Most American addresses have an overtly mediaeval-inspired design – compensation for being a young nation? The Scandinavian addresses, by contrast, tend to have a more modern look, often combined with historical elements.

Most of the addresses came in exquisite tubes or covers. Some addresses were even delivered in specially made boxes. Decorative cords, pompoms, tassels and ribbons add to the festive look. Some senders enclosed a wax copy of their seal, packaged in special cases made of precious metals or wood. The packaging was a very important part of the addresses. It was supposed to be representative of the sender – and the occasion. The packaging also often featured national or regional visual elements. Eastern European countries attached particular importance to the packaging. Velvet, embossed calf leather, metal fittings, gilt, silver, and enamel were used to create magnificent packaging.

The foreign guests that came to the celebrations brought their addresses with them, to deliver them in person. This was done at a special event held at the National Theatre. The Rector of the University, geologist W. C. Brøgger, thanked the guests for their splendid gifts. In the evening, the King and Queen invited nine hundred guests to a supper at the Royal Palace. The addresses were probably discussed at the table. Was there a certain status attached to having delivered the most attractive and opulent address?

The exhibition at the Norwegian Museum of Decorative Arts and Design ensured that the addresses were on display for several weeks after the official celebrations had come to an end. They were then registered by the University, before being packed away and ultimately forgotten about. With time, the practice of handing over addresses at formal occasions disappeared. When the crates containing the addresses were discovered in a storage warehouse in Hønefoss, they were in quite a mess. Many of the labels had fallen off, and many of the addresses were not in their original packaging. Another laborious registration project had to be carried out, this time at the Museum of University History (MUV). They are beautiful mementos of a forgotten tradition – and a very hectic week of celebration in the Norwegian capital, Kristiania.