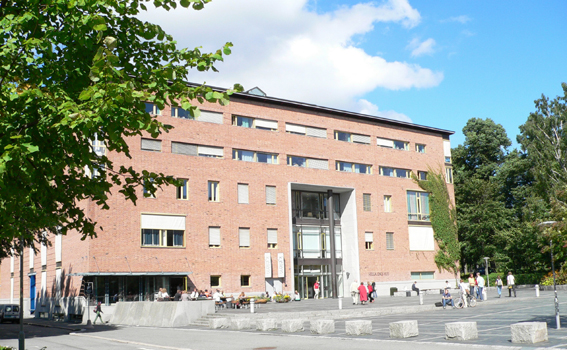 The Faculty of Educational Sciences moved into the Helga Eng building in 1994. Photo: Shane D. Colvin

Pedagogy at the University of Oslo evolved at the intersection between the humanities and social sciences, with links to psychology, history, sociology and philosophy. Pedagogy’s central role in society and its multifaceted relationship with adjacent disciplines and traditions have provided a broad potential for conflicting interpretations of what pedagogy as a university subject was, is, and should be. Pedagogy as a university subject has therefore been characterised by various conflicts between different academic, cultural, social and political ideals.

The Department of Educational Research (PFI) was established at the University of Oslo in 1938, strongly influenced by the “reform pedagogy” movement. Reform pedagogy originated in Europe and the USA towards the end of the nineteenth century in response to challenges from an increasingly urbanised and industrialised society, an increasingly comprehensive public school system, and, not least, as a reaction to developments in the humanities that queried the religious foundations of both schools and views on education.

The essence of the diverse reform pedagogy movement was that educators focused on understanding children and young people’s abilities to learn at different developmental stages and sought to stimulate pupils to be active in the learning process. Reform pedagogy saw the school system and education as a means to achieve cultural change and appeared to be in strong opposition to the existing school systems.

Both the teaching and the research at PFI were characterised by a desire to develop schools that did not see the individual pupil as a passive recipient of knowledge, culture and tradition. This programme manifested itself in a number of objectives: 1) introduction of principles from so-called “work schools” such as own input and initiative, freer use of lessons, group work on projects, and individual adaptation; 2) stronger focus on developing pupils’ ability to relate actively to a democratic society in rapid change; and, as an underlying principle, 3) pedagogy had to be made more scientific, with a solid grounding in psychology, and the reform work in schools had to be subject to scientific testing.

Greater diversity and the positivism dispute

For a long time, the Department of Educational Research enjoyed a near monopoly on pedagogical research in Norway. In the 1950s, and especially from the end of the 1960s, educators with other views on pedagogy and its role in society started to challenge the power of the Department. The so-called positivism dispute united the Christian–conservative pedagogues and anti-authoritarian radicals together in their common criticism of the Department of Educational Research (PFI). Both parties agreed that the underlying values on which pedagogy as a subject was founded had to be defined far more clearly. With their differing values as their respective starting points, they mobilised strong objections to the dominant psychology-oriented pedagogy, which was regarded as an insurmountable obstacle to implementing their respective Christian and socialist values in pedagogy as a discipline and in the Norwegian school and education system.

The conflicting views led to a split in the discipline from 1974, when the social-pedagogical study line was created at the University. In the aftermath of the contentions in the 1970s, both the Norwegian educational research community and PFI have been characterised by approaches that are more diverse. In addition, pedagogy as a discipline has been expanded to include far more than teaching and education in schools.

Criticism of the activities at PFI had formed a coalition of cultural forces that previously in Norwegian history had proved capable of bringing about major changes, namely a popular, anti-authoritarian movement in alliance with the Church and micromanaging politicians. However, this alliance started to crack as soon as their common enemy was defeated.