A new, modern university subject was created with the 1875 appointment of Lorentz Dietrichson as an extraordinary professor of art history. The goal was to elevate the population’s appreciation of art, promote growth in skilled crafts, and support cultural institutions.

Internationally, art history was a minor subject. None of the other Nordic universities had separate chairs in art history, and there was only a handful of professorships at German-speaking universities. However, the art history as a university subject was growing. The growth was largely due to a widespread belief in the potential of art history to promote national economic growth and cultural development. This kind of perception of the civilising power of the subject permeated the first international congress of art history in Vienna in 1873. The participants at the congress, primarily museum men from German-speaking countries, stressed how the world exhibitions demonstrated which nations had learned to employ knowledge of art history in the development of industrial and craft products. These countries had consequently experienced economic growth and cultural advances. The congress agreed to work to make the authorities aware of how important it was to establish professorships in art history at all universities. 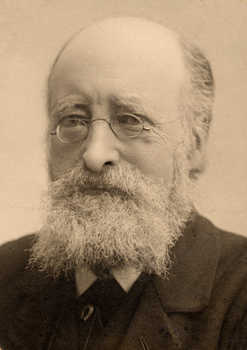 A professorship in art history

Two years later, in 1875, similar arguments were decisive for the creation of a Norwegian professorship in art history. The University, the government and the Storting all referred to the view that training workers in classical and national fine art forms would help create competitive Norwegian craftsmen. Knowledge and beauty in homes would contribute to the edification of the individual and society. Knowledge and general cultural education were the means to counter material and cultural poverty, and the enlightenment of the people was the task of the University.

General appreciation of art and the growth of skilled crafts

The appointment process made it clear to Dietrichson that art history was to be a culture-building discipline. It was expected that he would help improve the general public’s appreciation of art, promote growth in skilled crafts, contribute to Norwegian artists returning home from abroad, and aid the creation and running of cultural institutions. In addition, he had a formal obligation to lecture at the planned future art school. In other words, he was expected to contribute to wide-ranging cultural and academic activities, with an ultimate goal of a materially and morally better society. Dietrichson explained how he would fulfil these duties in his inaugural lecture under the title “The significance of and conditions for the study of the arts in Norway.”

Pantheon of science and art

In his inaugural lecture, the newly appointed professor made it clear that the ability of the subject to have a culture-building effect was contingent on a strong relationship between academia and society. Three new art museums and an art school would need to be established, and the close ties between the University and the new institutions would need to be underlined symbolically in a monumental building complex linked to the capital city’s main parade Karl Johans gate. The centrepiece of this pantheon of science and art would be the new university subject of art history and its professor. 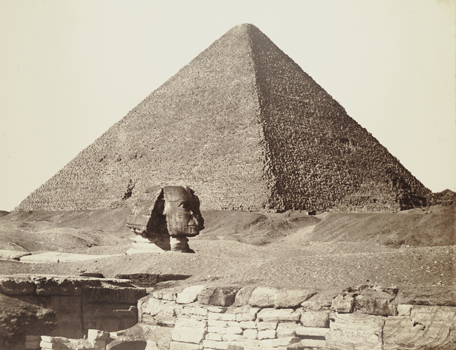 The Cheops pyramid outside Cairo was chosen as the starting point for the history of developments in art around the world. Photo: E. Désiré, Photographie Parisienne, 1867.

Although art history was not given the central role that Dietrichson had envisaged, the culture-building missions remained at the core of the discipline’s activities throughout his professorship. The tasks were also closely linked to his personal artistic interests. He got involved in the establishment and running of several museums and the preservation of ancient monuments and travelled widely throughout the country to give popular lectures. Through lectures, newspaper articles and books, he worked to teach Norwegians about beauty in home décor, fashion and the clothing reform movement. As a professor of art history, he was also the government’s adviser on matters pertaining to art. Equally important was his position as an informal national adviser. It was to him that priests wrote when a village wanted to build a new church, sew a new altar cloth, or commission an altarpiece, and he responded to all the inquiries. The professor and his varied fields of work made up the content of the university subject.

Dietrichson’s university lectures on art history could draw audiences of up to 350 people. An average audience was 100–150 people, right up until he held his last lecture series in autumn 1916 at the age of 82 years. There was no curriculum or regulations for the teaching, nor any regular opportunity to sit examinations. The lectures were public, and the audience thus had extremely divergent prior knowledge and motives for attending the teaching. Many people were members of the city’s educated upper classes, some were Examen Philosophicum students, and some were students from the profession-oriented programmes in philology and theology.

The field of study

When the subject was introduced at the University, the content of the academic field “art history” was not defined. Dietrichson therefore had to make some choices, as is reflected in the teaching offered. The lecture plan for the first few years was based on a recounting of the history of world art from ancient times until the present day, as described in the literature on art history. The overall history of art in the existing works was a relatively new construction. It first appeared in 1842 in Franz Kugler’s “Handbuch der Kunstgeschichte” and was quickly followed by works by Carl Schnaase, Anton Springer and Wilhelm Lübke. Here, the history of world art began in the orient, continued through ancient Greece and the Roman Empire through to the Christian Middle Ages and the Renaissance. This historicising, comparative perspective underscored that art history was a modern empirical science with an international academic identity and legitimacy.

The academic legitimacy of the new subject also depended on research and recruitment. Research was not a key element in connection with Dietrichson’s appointment in 1875, but within the University and in the international academic community, professors were expected to do research. This was also Dietrichson’s personal ambition and something he considered crucial for art history as an academic subject to fulfil its societal tasks. Alongside his lectures in world art history, in 1877 he began presenting his research findings in lectures before publishing them in print. Research-based lecture series on a single topic could run over several years. His research on Norwegian art history was particularly important and covered everything from Norwegian architectural history in general and stave churches in particular to crafts, sculpture and painting. 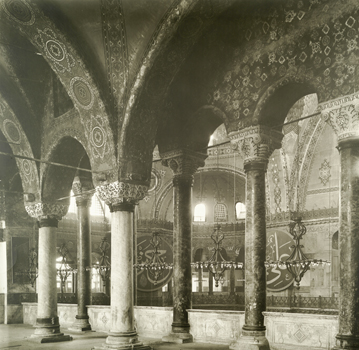 This interior from Hagia Sophia in Istanbul is part of a series that was published by the Neuen Photographischen Gesellschaft in Berlin 1907 for use in teaching and Research.

The public lectures alone were not sufficient for recruitment purposes. In autumn 1878, Dietrichson therefore began arranging seminar-like classes. In these “art history exercises”, he and a limited group of particularly interested students reviewed specific topics over a longer period of time. As an aid in teaching, he used posters, photographs and books, purchased for the “Collection of art history teaching materials”, established by the Storting in 1878. Like other professors of art history, Dietrichson purchased the series from renowned photographers, which he ordered from catalogues that were sent to him, for the new, popular university subject of art history. Many of the participants in his “art history exercises” took a doctorate in the subject.

Dietrichson’s professorship was personal. This meant that he could not retire without risking that the subject would be discontinued, despite the fact that several of his former students were ready to take over. He worked to ensure the continuity of the subject, but after his death in 1917, it took three years before the Storting approved funding for an ordinary position in art history in 1920. The position was filled by former university research fellow Carl Wille Schnitler, who died relatively young in 1927. The position then remained vacant until 1935, when Anders Bugge was appointed as a professor.