The road to becoming a university for the masses was neither straight nor clearly signposted. Jan Eivind Myhre has written a history of the students at the University. 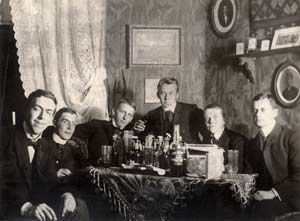 In autumn 1825, a 17 year old named Henrik enrolled at the Royal Frederick University in Christiania, as Oslo was called at the time. He had passed the university entrance test, the “Examen Artium” – or “the first examination”, as it was also called, since it was the first examination students took at the University. Henrik was thus one of Norway’s 446 university students. They were taught in rented premises in the centre of the Capital.

Like most of the fifty-odd young students in the University’s 18th year group, Henrik was the son of a senior public official. His father was the parish priest of Eidsvoll. During his first year and a half at the University, Henrik studied a wide range of subjects, from mathematics and biology to history and philosophy. After passing the so-called “second examination”, he chose to follow in his father’s footsteps and study theology, even though his main interest was elsewhere: Henrik wrote poetry. The profession-oriented degree programme in theology was one of the two main programmes of study at the time. The other was law. A much smaller group of students chose to study medicine. Philology was a very minor – and perhaps rather eccentric – choice.

“Henrik Wergeland was a typical student in that he chose what was called a ‘bread and butter’ study at the time. Most people felt it was safest to embark on studies that led to a profession, even though they might have preferred to study something else,” says history professor Jan Eivind Myhre, who is currently writing about the history of the University of Oslo.

The University’s nature as an academy for the elite did not change much in the first few decades. At least half of the students were children of senior public officials (“embetsmenn”), i.e. academics or officers. A quarter were from the business bourgeoisie, that is, relatively well-off merchants and other businessmen. The last quarter were ordinary craftsmen, farmers, teachers and lower-ranking public officials. Up until 1870, there were almost no students from the working classes.

“It was a very select group of people. Even though Norway did not have a nobility, there was an upper class that really lived up to the name. Nevertheless, it was not impossible for farmers and workers to get into the University. Norway had high levels of literacy from fairly early on. Even before the University was founded in 1811, large parts of the population could read, including quite a few farmers. Studies carried out in north-western Norway revealed surprisingly high literacy rates,” says Myhre. 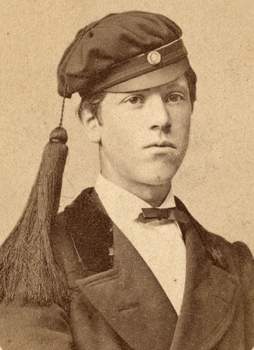 The requirement that students had to know Latin nevertheless meant that large portions of the population were excluded from the University. In an era when there was a huge shortage of qualified professionals, especially lawyers and medical practitioners, the authorities decided to make an exception. A few applicants – primarily those from humble backgrounds – were admitted to the University on the basis of a “preliminary examination” that did not include Latin.

“These students were known, rather derogatorily, as ‘præler’, meaning ‘prelims’. The academic content of the studies was just as good, but graduates were not awarded the same titles. Instead of ‘candidatus juris’ they were ‘examinatus juris’. As ‘lesser’ students, they formed a kind of proletariat at the University, but often had successful careers afterwards,” says Myhre.

The preliminary examination scheme was discontinued in 1845, but by 1869, the Artium examination in natural sciences was recognised as equal to the traditional Latin Artium, meaning students could once again get into the University without Latin. This was very early compared with other countries and helped make the University accessible to wider segments of society. By contrast, women were not admitted to the University until 1882.

What drove young people to the University in the first few decades?
“I think that for many people back then, it was a completely obvious thing to go to university. They were following in their fathers’ footsteps. Children at this time largely fulfilled their parents’ ambitions. The farmer students, of which there were increasing numbers after 1870, generally studied theology. Priests were the main authority in the local community. So if you had a bright son, you wanted him to become a priest. Tax collectors and procurators were not so popular, and most farmers had never met a university professor.

The students could be divided into two groups, Myhre explains. There were those on a ‘bread and butter’ course of study, because they wanted a position in society, and those who were genuinely interested in the subjects they studied.

“Some had ambitions of a specific profession, and set out to pursue it, while others were driven by academic interest. The latter may have chosen law, medicine, or theology because they were interested in these subjects, or they may have been interested in other, less vocational subjects, but chose to secure their future with a ‘bread and butter’ course of study, while pursuing their true interests alongside their studies. Mikael Sars is a famous example. He was a priest in north-western Norway, but was most interested in marine life. He was internationally revered for his studies and was invited to join the University as a professor of biology.

Henrik Wergeland may well have been one of those students who chose a “bread and butter” course of study like theology more for the sake of the career opportunities it afforded than because of any strong interest in this particular subject.

“He was mostly interested in poetry, but there is no reason to doubt that he was genuinely interested in theology too. He applied for several positions as a priest, without success, including in Nannestad. He earned a little money from his writing, but it was not enough to live off. Eventually, he ended up as the head of the national archives. At that time, this was a small, insignificant office within a ministry. It was the system’s way of taking care of people like him. It was a recognition of his great talent. He received a steady income, but the work was not particularly demanding and left him plenty of time for writing poetry,” says Myhre.

The second half of the nineteenth century saw a number of important developments in the Norwegian educational system. In addition to the University, a number of schools of higher education that did not require Examen Artium were established around the country: teacher training schools, nursing schools, agricultural schools, folk high schools, county schools, handicraft and housewife schools and in Trondheim a school of engineering. This provided a much larger proportion of the population with access to higher education.

“From the end of the nineteenth century, people from the lower echelons of society got more education, but not usually at the University,” says Myhre.

The opening up of university education to broader segments of the population was not a linear development. For a while, it looked as though the elite were getting an even firmer hold on several of the university studies. Some subjects, such as medicine saw a narrowing of the recruitment base in the years up to the 1960s.  The children of craftsmen, farmers and workers together accounted for 21 per cent of medical students between 1890 and 1909. Between 1940 and 1951, this proportion had dropped to 17 per cent, reflecting fewer students recruited from the lower classes.

“Over the course of the hundred years from the mid-nineteenth century to the beginning of the 1960s, Norway went from being a poor and technologically backward country to being rich and highly developed industrially, but the number of university students increased very little in proportion. Did university education not have anything to do with this giant leap in development? The answer is that much of the training occurred at other educational institutions. The University played a more indirect role,” Myhre explains. 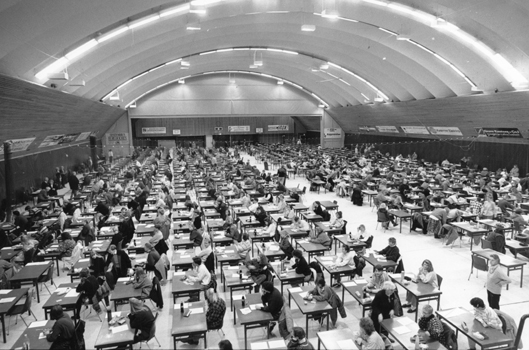 University for the masses

What led to the emergence of the university for the masses?
“Some of the growth was due to increased demand, i.e. more people wanted a university education. But this is not the only explanation. The baby boom after the war meant there were many more people taking the Artium. It was also the result of political goals from the 1950s. The Ministry had indicated that they wanted to increase the general level of education. Education was regarded as good for society in its own right, not only as a means of filling positions with qualified workers. Not least, more women were going to university. Today, 59 per cent of students at the University of Oslo are women.
With this growth in the number of students, one might think that university students lost the high status they had had when the University was a more elite institution. Myhre points out that it is not merely the number of students that determines the prestige of studies.

“There are also other factors that determine the kind of status associated with various subjects. Medicine is commonly regarded as an archetypal elite programme of study. There has always been a limited number of places, but it was only after the war that the selection process became so narrow. Prior to 1940, studying medicine did not carry high status,” says Myhre

“We have the Artium grades of the students on all major courses from this period, when all the programmes of study were open. The general pattern is that the ‘weakest’ school leavers who passed the Artium studied medicine and theology; next up was law; second from the top were the natural sciences; and at the top, the brightest students studied philology, including psychology and philosophy.

When did it become less certain that a university degree would ensure you a relevant job?
“Even before the era of the university for the masses, the employment market fluctuated. After the massive recruitment of lawyers and theologians in the first few decades of the University, in the 1830s it became more difficult for them to find a job. In the period between the two world wars, law graduates had a very hard time getting a job. Lawyers are subject to the economic cycles in the private sector to a much greater extent than people who had studied medicine, natural sciences and philology. A jobseeker famously placed the following advertisement: “Law graduate with top marks and a bicycle seeks job”.

Why didn’t the expansion of the University in the 1960s lead to higher unemployment among academics?
“Academics started being employed in larger parts of the labour market. This era saw a huge increase in the level of education in the public bureaucracy, both centrally and in the municipalities. A new class of public officials has arisen alongside the old decision-making hierarchy. There was also a colossal expansion of the public sector, especially in the 1970s. There was a dire need for university-educated secondary school teachers. It is perhaps a little harder to get a job now than it was in the 1970s, but I don’t think any other Western country has lower graduate unemployment than Norway.”