When it opened in 1932, the University School of Pharmacy at Blindern was one of Norway’s most radical buildings. The functionalist Pharmacy Building’s charm has not diminished with time.

A faded photograph shows the Blindern area on the western outskirts of Oslo at the beginning of the 1930s. In the background, you can just about see Øvre Blindern farm with its white Swiss-style main house. The foreground shows a horse at work. But it is not working on the expansive fields surrounding Øvre Blindern farm – horsepower was used to help build the Pharmacy Building. A giant, redbrick cube, the building stands alone at Blindern. The rest of the campus has yet to be built. 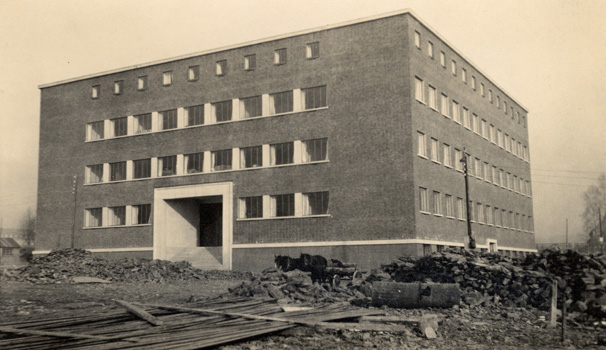 Workhorses in front of the Pharmacy Building. Photographer unknown.

In 1926, an architectural competition was announced for new buildings for the departments of physics, chemistry and pharmacy to be built in Blindern. Classicism was firmly back in fashion in Norway. Once again, monumental buildings were borrowing heavily from antiquity, with façades featuring temple front gables, pillars, pilasters and steps all arranged according to strict principles of symmetry. Buildings were often blockish in shape, with plain walls without much ornamentation and tall, narrow, elegant windows. The buildings exuded tranquillity and dignity, often with a rather sombre, cool expression. In Oslo, the Deichmanske Library and Soria Moria in Torshov are typical examples of buildings from this era. All the submitted proposals for the new university campus in Blindern were classical in form and appearance. An ambitious zoning plan by Sverre Pedersen, with a main axis from the city up towards Blindern, had already been adopted.

The winners, architect duo Finn Bryn and Johan Ellefsen, placed the departments of physics and chemistry in the same building. The general layout was similar to that of the building that was actually built. This building was intended to form a main entrance to the University. The building featured classical pillars and was dominated by a large dome. The building had a symmetrical H-shaped footprint, with a pool with fountains in front of the façade facing the city and another on the Blindern side at the back. The Department of Pharmacy would be located in a separate building next to the water feature at the back, in roughly the same position as today. The basic form was similar to the buildings that we know today, but their appearance ended up being quite different from the plans submitted in the winning proposal. 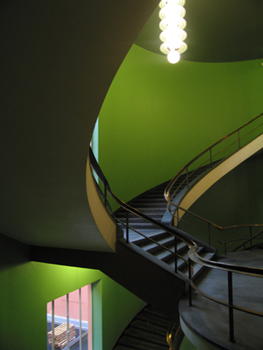 Bryn and Ellefsen both went on study trips to Germany and France towards the end of the 1920s, where functionalism had exploded on to the architecture and design scene. Originally, functionalism was essentially an architectural theory with strong social elements, although nowadays we tend to think of it as a style. The main idea behind functionalism was a desire for a democratisation of society through architecture and design. Architects focused more on functional aspects than conventional rules and principles of style. At the same time, the movement had instantly recognisable physical characteristics: geometric building shapes, horizontal window bands, and an absence of ornamentation. The Pharmacy Building ticks all these boxes. It was not possible to change the original floor plans significantly, so instead they superimposed a functionalist aesthetic on the outside and the inside of the building. Oslo already had a handful of functionalist buildings, but none of this size, and none intended for public use. The Pharmacy Building revolutionised Norwegian public architecture.

The cubic shape of the building was preserved. This shape was already in line with functionalist ideals. The portal, which was originally intended to stretch up over three floors, was reduced to two floors. The windows were changed into long, continuous bands. The natural variations in the red bricks of the walls and the contrast to the granite plinth, portal and windows surrounds were now the only decorative features. Inside, the planned main staircase with a row of pillars was replaced by a bold, floating staircase that still adhered to classical rules of symmetry. The brass railings are a masterpiece of design and construction. The entire interior now had a more streamlined look. The colours were not added until the official opening of the Blindern campus in 1936. The colours were bold and starkly contrasting: apple green, ochre and gold. Shiny, grey aluminium paint shimmered on the ceilings, typical of that era’s daring use of colour and fascination with contrasting surfaces. The idea that all functionalist buildings featured pale colours is a
recent misconception. 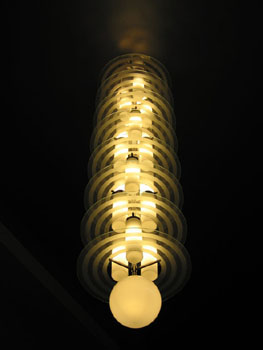 The chandelier in the stairwell is inspired by the era’s Art Deco style. Photo: Bjørn Johansen

The building was to serve as a place of teaching, work and research. It also had to include laboratories and storerooms for materials. The interior was carefully planned to form a harmonious whole. The entire building was furnished with simple, but stylish, custom-made fittings, designed by the architects themselves. Oiled or painted woodwork was combined with shiny chrome fittings. The chairs were made of chrome-plated steel pipes and leather. The doors were clad with smooth, oiled veneer. At the time, this was still new in Norwegian interior design. Radiators and toilet fixtures were reminiscent of the streamlined aesthetics of machinery. Some rooms featured new lamps bought from the Danish designer Poul Henningsen. The rest of the light fittings were designed by the architects themselves. The large chandelier in the stairwell was a showpiece, made of chrome and plain and etched glass, with a futuristic design that referenced outer space and American skyscrapers. The Pharmacy Building was a true expression of the ambitions of a modern university.

Facts about the School of Pharmacy

One of the very first functionalist public buildings in Norway. The original colour scheme in the magnificent stairwell has been recreated. The building features several original interiors with wall-mounted furnishings and custom-designed furniture and fittings.

Although the building was also admired, the result of Bryn and Ellefsen’s changes came as a shock to some people. Together with the Physics Building and the Department of Theoretical Astrophysics that was built not long after, the Pharmacy Building was described as looking more like a factory. It did not have the classical dignity that people were accustomed to from the old university complex in the city centre. For the architects, the criticism was further proof that they had achieved their goal of designing custom-made, modern, public buildings. What could be more appropriate than the University as an experimental laboratory and a place for production of new knowledge? The University and society were at a crossroads. Others were more concerned about the lack of breakrooms for students and staff – a function that had not been specified as a priority.

Norwegian architecture continued in this new direction throughout the 1930s. The Pharmacy Building was part of a mental revolution that still characterises our view of architecture and design. When it was finished, the building stood out, and even today, it still seems modern. The stairwell, which has now been restored back to its original colours, is a visual feast. The Pharmacy Building marks a milestone in Norwegian architecture and continues to delight, challenge and fascinate to this day.