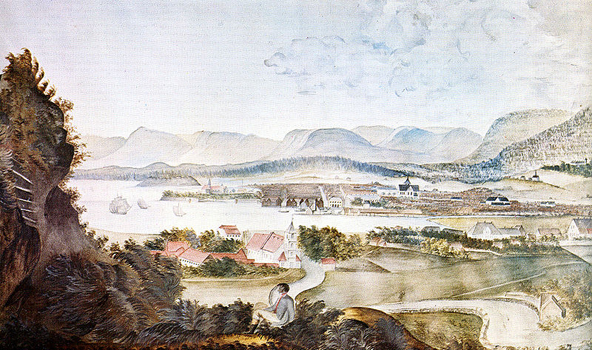 The University of Oslo (UiO) has a short history compared with many other universities in Europe. At the same time, 200 years is quite old in the context of Norwegian institutions. The Constitution and the University are roughly the same age. The main reasons why Norway was granted its own university in 1811 was a general need for increased knowledge, more easily available education, and the ability to supply the country with native senior public officials (“embetsmenn”).

In the twelfth century, schools were established in Paris and Bologna that attracted students from far and wide. These schools were organised by and granted privileges through clerical and private authorities. The name “university” was coined in Paris in the early thirteenth century, where teachers and students had joined forces in a community of interests – as a parallel to the trade and artisan guilds of the era. Universitas magistrorum et scolarium means “community of teachers and scholars”. The universities were international, and the teaching was in Latin. Philosophy was a common basis for the early universities, along with studies in theology, law and medicine. Later on, the subdivision into faculties that we know today appeared. Mediaeval universities awarded the degrees baccalaureus, magister and doctor – names we still recognise in higher education.

Places of study for Norwegian students

The University of Copenhagen

After the reformation in 1536, Norwegians and Danes were forbidden to seek knowledge at foreign universities before they had studied in Copenhagen. The University was to ensure loyalty to the King. Studies for the priesthood were centralised, and the University’s main task was to educate senior royal officials. In 1629, the King decided that everyone who was to be ordained to a clerical position in Denmark-Norway had to have a professional degree in theology from Copenhagen. In 1736, a professional degree in law from the same university was made compulsory for everyone who was to be appointed as a judge. In practice, all senior public officials now had to have a degree from the University of Copenhagen.

By the seventeenth century, there was an established community of Norwegian students in Copenhagen. A major reason for the large number of Norwegian students was the requirement that priests must have a degree in theology. It was no longer enough to complete an apprenticeship with a bishop in Norway to qualify as a priest. University studies in Copenhagen were expensive, and in 1661 the first request for a separate university in Norway was submitted to the King of the union Frederik III. A Norwegian university would provide both national prestige and social benefits. However, Frederik III was not in favour of this kind of decentralisation. Instead he strengthened the requirements for a degree from the University of Copenhagen in the following decades.

In the eighteenth century, the Norwegian population accounted for 40% of the population of Denmark-Norway. However, only 15% of the students in Copenhagen were Norwegian. In 1771, the Bishop of Trondheim, Johan Ernst Gunnerus, was commissioned to prepare a university reform. Gunnerus, who was a central figure in the Royal Norwegian Society of Sciences and Letters in Trondheim, had previously been a professor in Copenhagen. He took the opportunity to propose that a new university be established in Norway. If it was located in Kristiansand on the south coast of Norway, it would be natural for students from Jutland to travel there. Gunnerus also hinted that the Royal Society would be relocated to Kristiansand, to strengthen the links between the small academic community in Norway and a new university.

No to a Norwegian university

In his proposal, Gunnerus referred to the fact that Norway was far behind in terms of development and that the level of scholarship ought to be raised. The study offering he outlined indicated a shift away from theology and towards the natural sciences and subjects with practical applications. This was in line with the ideals of the age of enlightenment. The plans were met with great excitement in Norway, but were never realised. The powerful minister Johan F. Struensee in Copenhagen, who in practice ruled the union, quashed the plans, before being deposed and executed. The realm was now ruled by conservative forces.

In 1784, Crown Prince Frederik took over the power in Denmark-Norway. At the beginning of his reign, the Crown Prince Regent pursued reforms and a liberal policy. Four years later, he visited the Royal Norwegian Society of Sciences and Letters in Trondheim. A request for a Norwegian university was presented to him in person. Wealthy timber exporters and landowners in eastern Norway followed up this request in the 1790s. This movement was later dubbed “the university uprisings in Norway”. A special committee was appointed to work on the case, and a prize was announced for the best proposals for the organisation of a Norwegian university. The winner, Christen Pram, held that a Norwegian university – or “college” – would have to be a supplement to the University of Copenhagen. All the other proposals were dominated by patriotic ideals. Critical voices pointed out that Norway was the only country in Europe to be denied a university of its own.

In 1795, the committee sent a proposal to the Crown Prince Regent to establish a university in Norway. The application was denied, ostensibly due to a lack of funds in the difficult economic times. However, the Norwegian cathedral schools were given the right to hold the first university examination – Examen Artium. The official reasoning behind the decision was that the committee had assumed that the operating costs for a Norwegian university would be covered by allocations from Denmark. However, it was suspected in Norway that this was not the only reason. A Norwegian university could pose a threat. Copenhagen was the centre of the Union, and Frederik feared rebellious uprisings. Several members of the university committee had already been blacklisted as dangerous opponents. There had been reports of demonstrative celebrations of the French Revolution in Norway. It was safest to deny the proposal.

Norway was isolated from Denmark as a result of the war in Europe. British warships blocked the sea routes from Norway. On land, the nation was at war with Sweden. Denmark-Norway had allied with Napoleon, while Sweden was allied with the United Kingdom. The political situation meant that Frederik – since 1808 King Frederik VI – had to appoint a government commission in Christiania (Oslo) to govern Norway on his behalf. There were now more opportunities to develop an independent Norwegian line across the King’s policies. Count Herman Wedel-Jarlsberg became an important leader within these circles. He was a senior public official (“embetsmann”), had experience from government offices in Copenhagen, and was one of Norway’s most prominent noblemen. In addition, he had married into the Anker family – one of Norway’s wealthiest families. In 1809, Count Wedel played a central role in the foundation of what would soon be called the Royal Norwegian Society for Development (“Det kongelige Selskab for Norges Vel”). The purpose of the society was to promote anything that could strengthen Norway, economically and politically. A Norwegian university became a flagship cause.

Frederik VI was still strongly opposed to a Norwegian university. The King held that this kind of institution might create even deeper rifts between Denmark and Norway. However, Norwegian discontent was appeased with a proposal to establish professorships at the Norwegian cathedral schools, where students would be allowed to sit examinations for the preliminary university studies. The proposal was soon changed to include the establishment of a Norwegian college, in the mining town of Kongsberg, linked to the pre-existing Kongsberg School of Mines. Students were not required to have passed the Examen Artium or know any Latin. The main subjects would be natural sciences, economics and technology. This proposal was not well received in Norway. The country needed a proper university, not a technical college.

In December 1809, the Royal Norwegian Society for Development announced a competition for a proposal “On the establishment of a university in Norway”. The deadline for submission of proposals was 1 November 1810. Count Wedel and his father-in-law Peder Anker funded the prizes for the best entries. The winner was a teacher at Christiansand Cathedral School, Nicolai Wergeland, with a treatise called “Mnemosyne”. The general conclusion was that Norway needed a full university that covered all the branches of knowledge. He argued that a university was essential for all nations that wanted to become a cultural state. According to Wergeland the various sciences therefore belonged together in a united whole. “Mnemosyne” was widely applauded in Norway. In Copenhagen, it was not met with such enthusiasm.

Count Wedel still had plans for a college as a back-up plan when he was summoned to Copenhagen in February 1811. Frederik VI suspected Count Wedel of conspiring with Sweden, and one reason he was summoned to Copenhagen may have been to remove him from Norway. Rather surprisingly, he was tasked with conducting an official inquiry into the case for a Norwegian university while he was in Copenhagen. Count Wedel recommended a solution with a full university, assuring Frederik VI that the gratitude this would incite would help further cement Norwegians’ love for the King. The Count proposed locating the Norwegian university in Kongsberg, as there was already an established teaching community at the Kongsberg School of Mines “Bergseminaret”. In addition, the town was in dire need of new jobs.

The Count also assured the King that the Royal Norwegian Society for Development would undertake a nationwide fund-raising campaign in Norway. The university’s operating expenses could be covered through funds from the Anker Entailed Estate (“Ankerske Fideikomiss”), a foundation established after the 1805 death of the timber trader and the ironworks owner Bernt Anker. In other words, Norway would cover the costs itself. In return, it would have to be a full university. When the fund-raising campaign was concluded two years later, 3600 people had donated money, from senior public officials and wealthy landowners to ordinary farmers. In addition, Count Wedel, Peder Anker and a number of other merchants and landowners pledged annual sums, based on returns from their estates.

A Norwegian university – in Christiania

On 2 September 1811, the official founding date of the University, Frederik VI formally abandoned all opposition and agreed to the establishment of a university in Norway.
Indeed, the King even contributed a university fund, set up after the sale of properties in Norway. He provided an advance on funds from the Treasury and approved that duplicates from libraries and collections in Copenhagen were to be sent to Norway. Kongsberg was approved as the future university town. However, this plan never came to fruition. The new university was to be established in Christiania instead. Frederik VI had changed his mind after pressure from several quarters. Christiania had hospitals, which would make it possible to include medical studies. The original plans were for eight faculties, but the University ended up with four: medicine, law, theology and philology.

In late autumn 1811, the Royal Norwegian Society for Development arranged festivities across the whole of Norway to mark the event. The foundation of the university was also celebrated in Copenhagen. These celebrations were probably just as much an expression of Norwegian national consciousness. The gratitude to the King was probably slightly reserved. But Frederik VI lived on in the name of the University until 1939. The new university was called the Royal Frederik University – Universitas Regia Fredericiania.