The Historical Museum: A pig in a top hat and tails?

In 1902, the University’s three museums dedicated to cultural history moved into a brand new museum building. Opinions about the new museum were fiercely divided. Combining Norwegian antiquities with European Art Nouveau was, according to one professor, as inappropriate as dressing a pig in a top hat and tails. 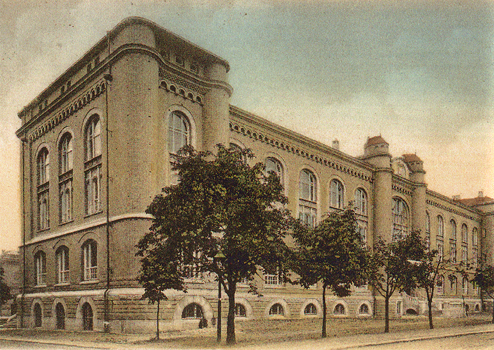 The Collection of National Antiquities, the Coin Cabinet and the Ethnographic Museum had been housed in the university buildings on Karl Johans gate since they were completed in 1851. By the 1870s, the buildings were already overcrowded. A new building at Tullinløkka was finally approved in 1891, and an architectural competition was announced. The winner was a young architect called Karl August Henriksen, with a German-inspired neo-renaissance design, not too unlike the National Gallery on the other side of the square.
However, Henriksen died in 1893. Three years later, the architect Henrik Bull was asked to take over the Project.

Henrik Bull was busy with the construction of the National Theatre when he was offered this assignment. Karl August Henriksen’s symmetrical ground plan and façade were to be preserved. The museums’ objects were to be exhibited over three floors. The building was still to have a brick façade with a Norwegian granite plinth and door and window frames.

At the beginning of the 1890s, a new style emerged in European architecture and design. Theorists had long been critical of the era’s preponderance for historical styles. Modern times required a new look. The first true Art Nouveau buildings were built in Brussels in the early 1890s. The new style was characterised by organic curves, asymmetry, unconventional combinations of materials, emphasis on light and space, fancifully shaped windows and attention to quality and unity. Nature was the main source of inspiration. This new movement became known as Art Nouveau (“new art”) in francophone countries.

In Germany, Austria and Scotland, the new style featured more cubic forms, symmetry, geometry and strong colour contrasts. In German-speaking countries, the movement was called Jugendstil (“young style”), and it was this branch that had the greatest influence in Norway. Although the style set out to be innovative and new, it was quick to incorporate historical, local and national motifs, elements from exotic cultures, inspiration from old legends, and a good dose of modern symbolism.

Henrik Bull quickly adopted the new style. He said himself that he was most inspired by the Austrian branch of Jugendstil. The Café Museum in Vienna, designed by the influential architect Adolf Loos in 1898, may have been a source of inspiration for the interiors of the new museum.

The Historical Museum was one of Norway’s first Jugendstil monumental buildings. The symmetrical main staircases that dominated the nineteenth century have now been replaced by a single flight of stairs that plays on new lighting and spatial effects. The leaded panels on the windows feature fields with painted glass in greyscale and geometric shapes. National symbols, such as animals and dragon ornamentation, are mixed with European Art Nouveau curves in the decorative elements. The interiors are dominated by gold against white and green, a typically Austrian colour scheme.

Facts about the Historical Museum

One of the most important Jugendstil buildings in Norway. The entire interior was designed by the architect. Contained premises for the University’s Collection of National Antiquities, the Coin Cabinet and the Ethnographic Museum, which have now been merged to form the Museum of Cultural History. Norway’s first museum built with electric lighting.

The outside of the museum is clad in smooth, yellow bricks with rounded corners, and the façade is broken up by soft folds. The granite stairs leading up to the main entrance merge with a powerful portal decorated with sweeping reliefs. National symbols, such as animal and dragon ornamentation, dominate the heavy oak doors and brass metalwork.

Wise owls, bearers of knowledge, guard the entrance, while sculptures of young torchbearers ensure knowledge will be brought forth to new generations. Above it all is the national coat of arms, symbolising that this is the nation treasure chest.

The architect designed all the interiors himself, including the chandeliers and display cabinets. Bull adhered to the Jugendstil philosophy that harmony and beauty are achieved through quality and holistic thinking. Not everyone agreed. Journalists labelled it “a barracks-like warehouse” and “hideous”. The Norwegian daily newspaper Aftenposten concluded that the new museum was not undividedly successful. In a later article in the same newspaper, published on 15 March 1908, professor of botany, Nordahl Wille, describes how the professor of archaeology Gustaf Gustafsson had painted over some of the gilded ornamentation to ensure that the extravagant interiors did not outshine the exhibits. Adorning a museum with such splendour, Wille concluded, was as inappropriate as dressing a pig in a top hat and tails.

The building sparked a major and important debate about the role of the architect. And irrespective of whether the Historical Museum is regarded as entirely suited for its function as a museum, the building has certainly enjoyed a renaissance as the prime example of Norwegian Jugendstil.