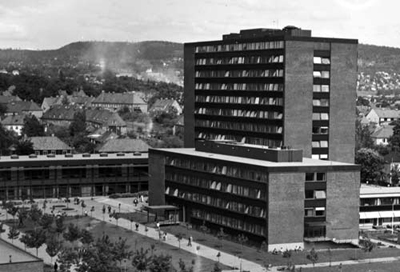 The Faculty of Social Sciences in 1972. Photographer unknown/MUV

Moen was inspired by American university campuses and American post-war architects. The main proponents of the era’s ideals within international architecture were Philip Johnson and Mies van der Rohe. Architecture was dominated by materials such as glass, steel and concrete. Façades had a regular, almost rhythmic expression that often reflected a modular-based interior. Volumes were frequently slab or block-shaped, reflecting an ideal that good, rational architecture did not need to play on old conventions of readable function. Moen’s campus at Blindern could easily be mistaken for a well-regulated business complex at first sight. But the new campus was planned as a university down to the very last detail.

A beautiful cobbled square separates the Faculty of Social Sciences and the Faculty of Humanities. Steps and plateaux define a separate forecourt for each faculty. The main square would come to mark the end of an axis that had been begun more than thirty years earlier, in connection with the functionalist science buildings in lower Blindern. Leif Olav Moen’s architectural firm continued the red brick from the older science faculties in both new complexes. The Faculty of Social Sciences also featured the same black, asphalt-coated steel plates on the façades that had been introduced in the buildings for the Faculty of Humanities. The window and door frames are made of stained wood. The ceilings of the open walkways that link the various buildings are also clad with wood. Teak was the most fashionable type of wood at the time and was used wherever it was practical, if the budget allowed it.

Offices with possibilities for expansion 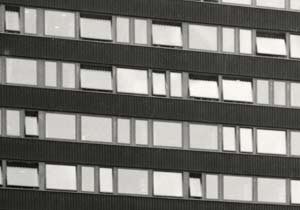 In the Social Sciences complex, Leif Olav Moen made several changes from his previous project. While the Niels Treschow building has the staircases and lifts next to each other at one end, the lifts are located towards the centre of the Eilert Sundt building. From level 3 up, the main stairs at the north end are replaced by smaller stairs next to the lift shafts.

This means that the corridors’ are broken up lengthwise. In addition, a core has been introduced in the middle of the floors with rooms for photocopying, archives, toilets and other facilities. In this way, two parallel corridors have been established. From level 3 up, the building also has offices and meeting and study rooms with both north and south-facing windows. The Eilert Sundt building thus had more meeting areas, while students and staff alike can enjoy the beautiful views. 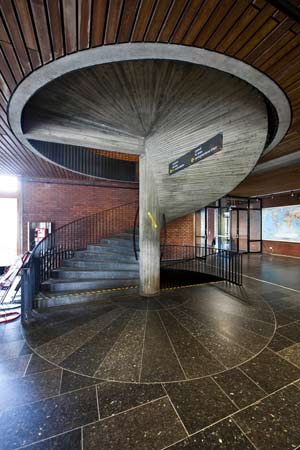 Concrete spiral staircase, with imprints from the formwork boards visible on the underside. Photo: Arthur Sand/MUV.

In the interiors, Moen repeated the use of materials from the Humanities complex. The larvikite floors, stained wooden slats on the ceilings, and linoleum-clad doors provide a sense of continuity and unity. However, Moen did introduce some changes. The vestibule, which in this building too covers most of the ground floor, does not have the Faculty of Humanities’ smooth, neutral walls. Instead, they are covered with the same rustic brick as the façade cladding. The slender black pillars in the Faculty of Humanities have been replaced with stockier rectangular pillars of the same type of stone-textured concrete that is used outdoors. The main stairs between levels 1 and 2 are concrete spiral staircases. Imprints from the formwork boards are used as a decorative element on the underside of the stairs. The staircase thus becomes a sculptural element in the room. In one low-rise building, the Harriet Holter building, parts of the walls feature cast stone-textured concrete, with tumbled pebbles, providing a lively, rustic finish. Here too the ceilings are clad with wooden boards, like in the outdoor covered walkways.

The buildings in the Faculty of Social Sciences feature a seamless transition between indoors and outdoors. The fact that most of the ground-floor window frames go all the way down to ground level increases the feeling of transparency. This is entirely in line with the international developments in architecture, with clear references to Mies van der Rohe’s Institute of Technology in Illinois, USA. The use of plateaux, intimate outdoor spaces and water pools between the buildings also belongs to the same tradition. The water reflects the façades, creating a sense of movement and space. These means were also the result of the close collaboration between Moen and the University’s landscape architect Sverre K. Steine. The architecture and outdoor areas at Blindern were planned and executed as a whole right from the very beginning. 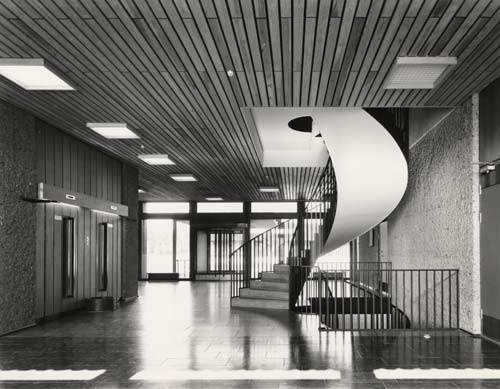 The vestibule in the Harriet Holter building features natural stone walls and wooden-slat ceilings. The window frames go all the way down to the floor, linking the building to the outdoor area. Photo: Teigens fotoatelier/MUV.

Interior design – that stands the test of time?

Moen’s architectural firm also designed furniture, lamps and a staggering number of details for the interiors. When the Social Sciences complex was completed, it was not only tailored to the Faculty’s needs, it was also a prime example of the era’s best use of materials and design. The furniture was made of chrome or black-coated steel, combined with pale wood, often upholstered with black artificial leather. The auditoriums have benches and lecterns made of pale wood and black-painted steel. The walls are red brick. Protruding and recessed bricks add life to the walls as well as improving acoustics. The ceilings in the auditoriums are also clad with wooden slats. Like in the vestibule, the lights are recessed into the ceiling. The floors are covered with grey-green linoleum. Many of the doors are also upholstered with linoleum, with a black rubber kick plate. The materials were chosen to be durable and hard-wearing. Today, the Faculty of Social Sciences has new furnishings from the 1980s and 1990s that are not at all in line with the original style. Hopefully future renovations will take Leif Olav Moen’s original designs into greater consideration.

Slideshow: The Faculty of Social Sciences from all angles

(The comments are in Norwegian)