UiO Museum of University History
Main navigation
Back to uio.no
Sub navigation Menu
History of UiO > Establishing the zero meridian in the Observatory
Norwegian version of this page 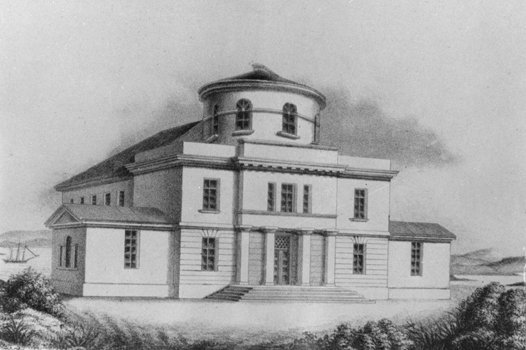 The Observatory was built at Solli, far from the bright lights of the city and with an unobstructed view in all directions. The allocation from the Storting was linked to the new nation state’s need for scientific research and development. Christopher Hansteen (1784–1873) was an internationally recognised scientist with national research tasks. He held many offices at the same time, including director of the Norwegian Geographic Survey (“Norges Geografiske Oppmåling”), editor of the Norwegian Almanac, and head of standardisation of Norwegian measures and weights. The Observatory had important symbolic value for the new nation Norway

The building’s design is inspired by Danish neo-classicism, which dominated at the time. Danish-born Christian Heinrich Grosch (1801–1865) had studied under the great architect C. F. Hansen in Copenhagen. The latter’s influence can be seen in the Observatory’s cubic buildings, the smooth, plastered walls and the absence of ornamentation. The building has a T-shaped floor plan, consisting of a cross-wing crowned by the observation tower at the front and a long residential wing at the back. The Hansteens lived in the back wing, where they frequently hosted cultural evenings, which were attended by the most prominent artists of the nineteenth century.

The cross wing forms the main façade and contains the main observation rooms. The building is symmetrical around a double main entrance in a slightly protruding middle section. The entrance is framed by smooth pilasters (half pillars), and the plain walls are broken up by horizontal lines between the storeys. The windows are flush with the walls without any decorative surrounds, while the simple frame round the front door of the residential part was inspired by Egyptian designs.

Entering the Observatory through the main door provides an unexpected experience. Visitors immediately enter a rotunda lobby over two floors with a gallery and dome. The walls and ceilings are richly decorated with brightly coloured patterns and figures from the zodiac. The purpose of this grand lobby was to inspire awe and signify that this was a house of science, even though the paintwork is probably not original. From the 1840s on, the room was also used for geomagnetic measurements.

The rotunda has two rooms on either side. The first rooms contained large cabinets with instruments and books. The outermost rooms on each side were special rooms. The meridian room was the most important of the special rooms. On the second floor, Hansteen had more instruments and an office. A staircase leads up to the tower with the large astronomy telescope. A section of the top of the observation tower can be opened, and the entire tower top is on huge wheels and can be turned to provide a clear view of the changing positions of the celestial bodies.

Facts about the University’s Astronomical Observatory

Observatory for astronomical observations, meteorological measurements and scientific research. The cross-wing was designed as a giant scientific instrument, with a retractable, turning roof. It was originally also the site for Norway’s mapping work, geographical surveys, meteorology and almanac. The official time signal was given from the roof of the Observatory until 1923. The building includes private apartments in a separate wing for professor Hansteen and his family.

Norway’s zero meridian is marked on the floor on the Observatory’s Meridian Room. One of Norway’s most important historical buildings from recent times. The Observatory is the oldest remaining monumental building built specially for the University. It is a listed building.

The Meridian Room was constructed for the so-called Meridian Circle, an impressive instrument used to calculate the location of Christiania in terms of longitude and latitude. The capital's prime meridian is still marked on the floor. In order to measure the distance between the stars and a given point on the horizon, the roof could be slid to one side using pulleys and a winch. Corresponding tall windows could be slid into the walls. By these means, a wide column was created in the room that was tailored to the needs of the Meridian Circle.

An important building for Norway

The Observatory building is the point of origin for Norwegian natural science. Thanks to Christopher Hansteen's diverse activities, fundamental knowledge was created that came to form the bedrock of Norway as we know it today. Christian Heinrich Grosch is regarded today as one of the country's most important architects, and the Observatory holds a special place amongst his buildings. Overall, this provides a unique compilation of Norwegian scientific and architectural history.

In 1934, the city lights had reached Solli. The Observatory was closed and operations moved to Blindern. At the same time, the subject of astronomy transitioned away from classical observations towards so-called theoretical astrophysics.