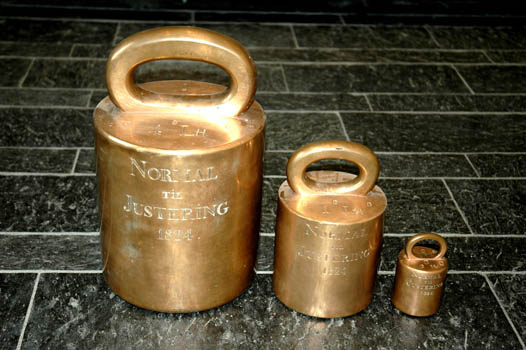 Norwegian standard weights from 1832: 8, 2 and ½ pounds, designed to implement the 1824 Act on measures and weights. Photo: Leif Halbo

The Danish–Norwegian system of measures and weights was established by the astronomer and mathematician Ole Rømer at the end of the seventeenth century. The Treaty of Kiel that was concluded at the end of the Napoleonic Wars resulted in Norway being separated from Denmark and forced into a personal union with Sweden. In this situation, Hansteen argued vehemently that Norway needed its own measurement system. His arguments included technological advances in measuring techniques, the fact that the old measurement standards were in Copenhagen, and that Norway ought to demonstrate its independence in relation to both Denmark and Sweden. Sweden wanted to bind the union more closely together by introducing the Swedish system of measures and weights in Norway. However, Hansteen held that the Norwegian system that was under development was better, claiming that it would be “more natural that Sweden switch to the Norwegian system”.

The work on the new Act on measures and weights was led by Hansteen. The Storting wanted the new system to be as similar as possible to the old to ensure “as little disruption as possible”. Several foreign measurement systems were assessed as a basis. The decimal-based metric system established in France during the revolution had already been introduced by law in France from 1795. However, it was far too revolutionary for Hansteen and the Storting. Perhaps this is not so strange as it sounds today – even Napoleon himself gave up and went back to the old system in 1812.

Hansteen published a comprehensive description of his proposal and arguments in the science journal “Magazin for Naturvidenskaberne”. The Norwegian length measure was defined on the basis of the length of a pendulum that had a swing time of exactly one second. This principle had been rejected by Ole Rømer 135 years earlier, on the grounds that it was not accurate enough. This was because the swing time also depends on gravity acceleration, which varies with latitude and elevation, among other things.

Hansteen’s Norwegian foot was equal to “12/38 of the length of the individual pendulum that at a latitude of 45 degrees north, at sea level, in a vacuum, will make one swing in one second of mean time.” The pot, which was Hansteen’s unit of volume, was defined as follows: “A pot has a volume of 54 cubic inches”. The unit of weight was the pound. A commercial pound was defined as “1/62 of the weight of one Norwegian cubic foot of distilled, air-free water at the temperature where its density is greatest (4°C) in a vacuum”. Apart from the fact that the new system was linked to the seconds pendulum, there was little difference from the old system. The new Act was adopted on 28 June 1824.

The metric system: decadian and simple

As the nineteenth century progressed, there was a growing call among Western scientists and business people for a standard system of measures and weights that was the same in every country. The metric system was generally regarded as best suited as a universal measurement system. The system had been developed by the French Academy of Sciences in the 1790s, as an attempt to create order in the chaos of the different systems of measures and weights in the country. The goal was to create a system that was based on a universal natural measurement that could be reproduced everywhere.

The metre was defined as 1/10 millionth of the distance from the equator to the North Pole. In the metric system, all units followed the decimal number system, based on multiples of ten. The weight unit was 1 gram, which was defined as the weight of the volume of water in a cube with sides measuring 100th of a metre (i.e. 1 cubic centimetre). Later the kilogram (1000 grams) was adopted as the basic unit of weight. The prototype for the metre was cast in platinum in 1799.

The many different systems of weights and measures that existed complicated international trade, and at the end of the 1860s, parts of the business community advocated the metric system. The matter was debated in the newspaper Morgenbladet and in the Polytechnic Journal. In the early years, it was primarily an academic discussion, with little anchoring in people’s everyday lives. The most ardent opponent was Hansteen, who stuck by his system based on the seconds pendulum. He claimed it would be virtually impossible for craftsmen, traders and ordinary people to learn the metric system. Supporters of the metric system argued that Norway would have to switch to simplify trade and enable Norway to keep up to date with scientific developments in Europe, since most of this was done using metric measures.

In 1872, the only countries in Europe not to have introduced the metric system were Norway, Sweden, Denmark, Russia and the United Kingdom. The Norwegian Parliarment therefore asked the Supervisory Commission for Measures and Weights to conduct an official study on the issue, but work never really got started, probably because Hansteen was still a member. In the end, a new commission was appointed in January 1873. It unanimously recommended switching to the metric system as quickly as possible.

The new commission stressed the simplicity of the decimal system. The old system was so complicated that “it is unlikely that anyone really remembers all its details”. By contrast, the metric system was so simple that “anyone can learn it in a few minutes, both as a whole and in terms of the names of the various subdivisions”. The Commission’s recommendation was sent to the Supervisory Commission on 9 October 1873. Christopher Hansteen had died earlier that year, and could no longer oppose the new system. On 12 May 1875, the Storting adopted the “Act on metric measures and weights”. On 20 May the same year, the international Metre Convention was signed in Paris.

Christopher Hansteen was the driving force behind the introduction of a Norwegian system of measures that was separate from that used in our neighbouring countries. He felt it was important for Norway’s sense of self. He also ensured a functional system for enforcing the law, which was of paramount importance.

As regards the choice of the technical basis for the measurement system, he can hardly be called particularly forward-sighted, in that he chose the unit of length on the basis of a principle that had been rejected by other countries – by Denmark some 135 years earlier – and promoted a system that was just as complicated as the previous one. Some of the responsibility for this must be attributed to the Storting, which had requested the least possible change, so that old equipment could continue to be used.

Even though Hansteen’s Act is a thing of the past, the Calibration Administration still lives on in the form of the current Norwegian Metrology and Accreditation Service (Justervesenet) and it plays a more important role than ever. With a global measurement system, it is important for international trade, industrial collaboration and science to ensure that one metre is one metre everywhere: so that a car part manufactured in Norway fits into a Japanese car, so that a kilo of meat weighs exactly one kilo, and so a litre of petrol is one litre at all petrol stations. This is the Norwegian Metrology and Accreditation Service’s responsibility in Norway.

And the metre itself? It has survived the test of time. However, its definition has changed. Today the metre is defined as “the length of the path travelled by light in a vacuum in 1/299,792,458 seconds”. How do we measure this? That is another story.