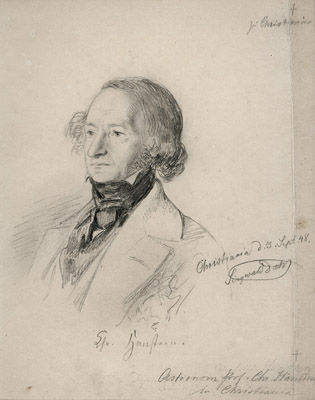 When the Royal Frederick University was established in 1811, Christopher Hansteen (1784–1873) was a graduate teacher in mathematics at the Latin school in Frederiksborg in Denmark. That year, he had also won a prize for his paper on terrestrial magnetism where he proved that the planet had two magnet axes.

Hansteen was appointed as a professor at the new University in Norway in 1813. In summer 1814, he and his wife Andrea boarded the privateer lugger the “Mazarino” to travel to Christiania and a position as a university lecturer in applied mathematics. At this point, the Danish King had just handed Norway over to Sweden, as part of the peace treaty in the wake of the Napoleonic Wars. However, on 17 May 1814, an assembly of Norwegian nobles had refused for Norway to be subordinate under the Swedish King and had approved a separate Norwegian constitution. The Hansteens chose to cross to Norway by sea because they wanted to avoid passing through Sweden. There they would be required to swear an oath of allegiance to the Swedish King. They were both chased and shot at before coming safely ashore.

From 1816, Hansteen was professor of applied mathematics and astronomy – important subjects in a fledgling nation like Norway. The newly established university had very little money and was located in rented premises in the city centre. However, it was impossible to observe the night sky from there. In 1815, Hansteen moved into a converted cabin near to Akershus Fortress. The first instruments were borrowed from the University’s Physics Cabinet and inherited from the defunct recently “mining seminar” – the school of mining engineering in the mining town of Kongsberg.

Hansteen immediately set about the work of placing the capital city on the map, even though accurate measurement was impossible without a custom-built observatory. There was not a common zero or prime meridian before Greenwich was adopted as the international prime meridian in 1884. Time and place had to be calculated from a local observatory. This was essential for Norwegian trade, shipping and science.

Hansteen was assigned very many, very important tasks. From 1815, he was editor of the official Norwegian Almanac.  For a long time, the Almanac was the most important printed document in Norway, after the Bible and the Hymnal. Each almanac required a huge amount of work to calculate the position of the sun and the moon for every day of the year.

From 1817, Hansteen was co-director, and later on director of Norwegian Geographic Survey, which was to survey and map the entire country.  He created a new measuring and-weighing system that was in use from 1824. Not only did he invent a new system of weighing and measuring, he was also a member of the commission that supervised this – the Norwegian Metrology and Accreditation Service. The system was not replaced by the metric system until after Hansteen’s death – a move he protested against right up to the bitter end.

Hansteen was given huge responsibilities in the fledgling nation of Norway, but he still found time to continue his research on terrestrial magnetism.  Hansteen’s thesis was that the Earth had two magnetic axes and four magnetic poles. To get his prize-winning treatise on terrestrial magnetism from 1811 published along with a separate magnetic atlas was a challenge. It was not until eight years later, in 1819, that the book and accompanying atlas were finished – with the support of Crown Prince Karl Johan. This publication established Hansteen as a central researcher in terrestrial magnetism.

That same year he travelled to London and Paris to spread word of his research. He had calculated that one of the magnetic poles was located somewhere near Baffin’s Bay. The United Kingdom was the global leader in polar expeditions at the time, and many people were working to find a north-west passage and the magnetic north pole. His research was well received, and in the 1820s he was an international leader in this research field.

Hansteen developed his own travel instrument, the Hansteen magnetometer, which was easy to carry around to measure geomagnetism. The polar explorer James Clark Ross was one of many who promoted the instrument. A number of British ships were equipped with one to be able to take measurements during their voyage. The results were sent to Hansteen as empirical data for new magnetic maps – what could be described as maps with an integrated compass. 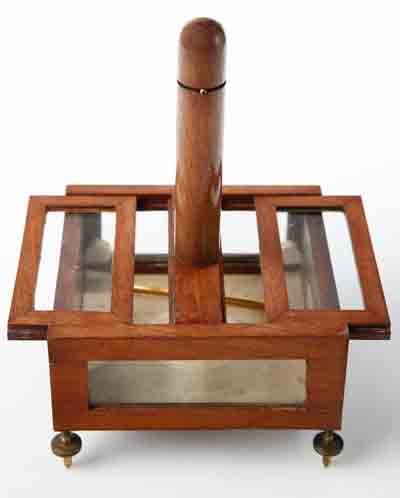 Carl Friedrich Gauss gradually took over as the leading theorist in geomagnetism. In the 1840s, the British also abandoned Hansteen’s theory of magnetism.

Back home from Siberia, it was not long before a new observatory was built. Hansteen had applied several times for money for a custom-built observatory. He argued that the entire nation would benefit from having an observatory. It would “be useful for higher education for geographic surveyors and marine officers and would also lead to increased literary activity at the University”. The Storting approved the project in 1830. The Observatory was the first monumental building the University built.

The building consisted of a scientific wing and a residential wing. Hansteen and his family moved in in 1833. Hansteen immediately started setting up his instruments. He finally had everything he needed to be able to perform the social missions he had been ascribed and had accepted. With his eye fixed firmly on the stars, Hansteen aimed to resolve everyday problems at sea and on the land. The main task of the Observatory was to put Norway on the map. This entailed first finding out where on the planet we are, and then mapping the entire country. 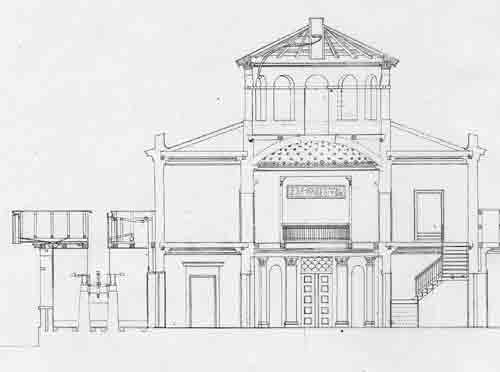 Elevation drawing of the scientific wing of the Observatory. The Meridian Room on the left.

The east wing was designed for a meridian circle – a telescope that allowed Hansteen to observe the stars as they passed the meridian.  The roof could be drawn aside and sections of the walls could be opened up so he could observe the entire meridian. The room was not heated, and Hansteen had to lie on his back under the instrument to do his observations. The closest room in the residential wing was his office, where he had set up a bed with plenty of blankets, so he could warm up after a stint serving the nation.

Roundtrip to the Round Tower

Hansteen adjusted his instruments and made observations for many years before finally establishing the Observatory’s exact latitude. Its longitudinal position had to be determined in relation to a known point. Hansteen used the Round Tower in Copenhagen. To find out the time difference between the Round Tower and the Observatory, Hansteen recorded when known stars passed the meridian. To this end, Hansteen used an accurate pendulum clock and 21 chronometers. In 1847, seven chronometers were sent back and forth between the Observatories in Copenhagen and Christiania. Both were compared with the Observatory’s pendulum clock and were also checked against the stars’ meridian passage.

Once the exact location of the Observatory had been established, all other measurements could be positioned in relation to this. In addition, a basis was also needed in order to be able to map the country – two fixed points the distance between which was known, measured using measuring sticks.

The tower contained the other main instrument: an equatorial refractor that allowed observation of the sky in all directions. It took 10 years before the instrument Hansteen had ordered was ready. Until then he had to make do with the old refractor from Vippetangen.

Magnetism at the Observatory

How did Hansteen find time to pursue his magnetism research between all the work he had been assigned for the nation? This was one of the reasons why Hansteen wanted the Observatory. In the rotunda, a long magnetic cylinder was suspended from the ceiling. A mahogany stand with a glass lid and copper rails ensured the device was protected against electrical disturbances. The west wing contained a telescope aimed into the rotunda that was used to observe the position of the magnetic needle every day. Hansteen also managed to have a magnetic observatory built near Drammensveien, next to the Observatory. 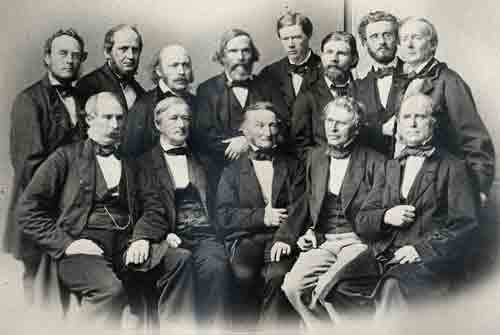 Hansteen retired in 1861, the same year that the Faculty of Mathematics and Natural Sciences was founded. The group picture shows all the academic employees at the faculty with Hansteen in the middle. Photographer unknown / MUV.

Surveying, metrology and accreditation, and the Almanac were all part of Hansteen’s new everyday life in the Observatory.  Now he also started publishing meteorological measurements. In addition, all the clocks in the city and the chronometers on ships in the harbour were set from a time signal that they could see from the roof of the observatory on Wednesdays and Saturdays at the same time – a time signal based on observations.

What kind of assistance did Hansteen have? Bernt Holmboe, who later became a university lecturer in mathematics, was his assistant from 1816 to 1826, but this was far from a full-time job. Hansteen used his wages from the Observatory for 1819–1821 to fund his study trip abroad in 1819, where he did research and made contacts. In 1840, the mining student E. B. Münster was employed as an observator, and four years later another mineralogist, Carl Frederik Fearnley, took over this position.

Life at the Observatory

The Fearnleys moved into the Observatory, where they had to share the space with Mr and Mrs Hansteen, their five children, and the servants. Research and observations probably took place in a fairly noisy environment. Hansteen and his wife were gracious hosts, and the Observatory was a popular meeting place for many of the citizens in the small capital city.

Hansteen’s health started failing, and he was exempted from teaching from 1856. Five years later he retired, at the age of 77 years. He and his family were allowed to continue living in the Observatory until he died at the age of 89 years in 1873. Hansteen was one of the people who actively built the nation, and his efforts were recognised and acknowledged during his lifetime. He wielded a lot of power long after others had taken over leadership of the various institutions he had established. And for a while, Hansteen was truly an international superstar, thanks to his research on geomagnetism.