While some University people were unwilling to compromise and sought direct confrontation with the German occupying forces, there were pragmatists on both sides who focused more on trying to keep the University up and running. They managed for three years. Historian Jorunn Sem Fure has written a book about the University of Oslo during the Second World War. 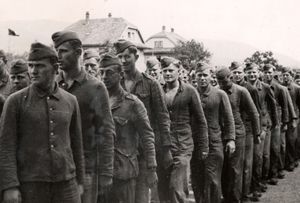 It is no coincidence that Jorunn Sem Fure chose 30 November 2007 as the release date for her book about the University of Oslo during the Second World War.

“30 November 1943 was arguably the most dramatic day in the history of the University. The Gestapo launched a carefully coordinated operation throughout the whole of Oslo. German soldiers arrested every male student they found. Some 15 professors were also arrested,” says the researcher at the Forum for University History at the University of Oslo.

At least 1,200 students were arrested. Many were released after a few days, weeks or months, but 650 were deported to Germany. Half ended up in the Buchenwald concentration camp. The other half were subjected to retraining attempts in Sennheim. All bar 17 came home after the war.

“But it could have been very different”

The mass arrests were a result of an increasingly heated conflict between the University and the German occupying forces. There were people on both sides who wanted an open confrontation. It is the uncompromising anti-Nazis whom posterity has hailed as the heroes in this dramatic chapter in Norway’s university history.

“But it could have been very different,” Sem Fure points out. “What if 650 young Norwegian students had lost their lives in German captivity?”

She is not the first to have asked this question. During the occupation, there were also people at the University who advocated collaborating with the Germans – albeit within clearly defined limits. They feared that active opposition would lead to senseless loss of young lives. A complex process ultimately resulted in the defeat of this more pragmatic line in November 1943.

Prisoners in the Aula

Shortly after Germany’s invasion of Norway on 9 April 1940, the Germans occupied the University Aula and other large assembly halls. In the early days, the Aula was used as a detention centre for arrested Norwegian officers. Among the detainees was Håkon Søraas, a university lecturer in English.

“A letter from Rector Didrik Arup Seip ‘an die Deutschen Truppen’ has been found, asking whether Søraas could be allowed to receive examination papers for marking. After all, this took place in the middle of the examination period,” explains Sem Fure.

The Rector’s letter is a telling illustration of the determination to keep the University up and running. Only a week later, teaching was resumed, albeit with a highly reduced capacity. Half of the students had disappeared. They were either on the run or had been conscripted for military service.

The first confrontation between the University and the Germans took place on 17 May 1940, when a group of young people demonstrated outside a cinema where the Germans had shown a newsreel from the military campaign.

“The Germans simply assumed the demonstrators were students. Terboven then called in Rector Seip and the student leaders to his headquarters to complain about this undisciplined, disrespectful behaviour. Seip replied that, firstly, he understood that the young people had been provoked, and secondly, he did not think they were students,” says Sem Fure. 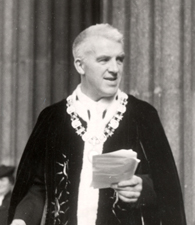 This was to be the only meeting between Didrik Arup Seip and Josef Terboven (The German Reichskommissar of Norway). The Rector was eventually imprisoned at the Grini prison camp in Bærum and later sent to the infamous Sachsenhausen prison camp outside Berlin.

“I think Terboven had already singled out the University and its Rector as his enemies. He was a renowned anti-intellectual. This meeting was probably also the origin of the phrase ‘the Seipian spirit’ that has since been ascribed to Terboven.”

Between two and three per cent of students sympathised with the fascist Nasjonal Samling (NS) party. The NS was a Norwegian Nazi party that supported and collaborated with the occupying forces and in 1942 established a puppet government under the direction of its “Führer” Vidkun Qvisling. Terboven and Quisling thus had allies at the University. They were found in all disciplines and at all levels of society.

The opposing students clashed on 24 September 1940 in the so-called “Aula basement brawl”. The student’s canteen was in the basement of the Aula. When the NS students showed up in the Aula basement wearing the party’s uniform, they were beaten up and thrown out. That was not the end of it, however. The NS students went and got reinforcements. Like a regiment ready for battle, they lined up, arm in arm, on the main steps of the University Aula. The mass brawl that then ensued was only stopped when mounted police showed up.

In a speech the day after the Aula brawl, Terboven announced that he would be appointing NS people to govern the ministries, including Ragnar Schanke as head of the Ministry of Church and Educational Affairs. Despite this move, there was no immediate regime change at the University. The NS sympathisers were given a cold shoulder.

This led to growing frustration among the people who had the political power on their side, but who never seemed to gain any influence. A whole year passed with only minor conflicts. The University won some victories – and suffered some defeats. Attempts to instate NS-loyal examiners for law examinations were thwarted, but the University had to accept the employment of three or four unwanted professors.

“The NS professors did not get the clout they had hoped for. They were frozen out, and ended up lecturing to empty rooms. This was also partly because they were poorly qualified, and would never have been appointed in normal competitive conditions,” says Sem Fure.

The exception was the geologist and polar researcher Adolf Hoel. He was a respected scientist and a skilled administrator. On 11 September 1941, Minister Schanke called a general meeting in the Aula, where he deposed Rector Seip and his entire administration. The reasoning was that they had “worked against the new era”. Schanke appointed himself as Rector, but let Hoel, a senior lecturer, take care of the day-to-day operations. This relatively moderate NS man would do much to keep the University running until November 1943.

What did the students think about the teaching during these three years?
“Many recalled that history lectures could be quite lively. Among others, professor Jacob Worm-Müller was openly critical of the Germans. He had to flee to London quite early on. Johan Schreiner gave lectures on German history that were probably quite far from the Nazis’ official version. He was arrested a couple of times, but the Germans never intervened directly in his lectures,” says Sem Fure.

For many people, Adolf Hoel was the only acceptable NS man in the rectorship. For others, he was the worst conceivable. They believed that Hoel’s willingness to cooperate could undermine the work to prevent the sneak introduction of Nazi politics.

“Two opposing views arose among the University’s resistance movement, with differing strategies for the road ahead. A small group, led by psychology professor Harald Schjelderup, constantly sought confrontation. Known as the ‘action line’, they were willing to risk closure in order to demonstrate their absolute stance against Nazism. The other group, known as the ‘dean line’, was much more willing to compromise, and was led by professor Georg Monrad Krohn in the Faculty of Medicine, in close cooperation with the Dean of the Faculty of Mathematics and Natural Sciences, Halvor Solberg. For them, the most important thing was to keep the University up and running. This in itself was regarded as protection against Nazism,” explains Sem Fure.

The situation came to a head in autumn 1943, largely as a result of three events. The first was the NS students’ attempt to force all the students to join the NS organization Studentsambandet, and the backlash that ensued. The second was the conflict over the criteria for admission to the School of Medicine, which had long waiting lists and fierce competition for very few places during the war years. Students were selected on the basis of their grades alone. The NS students felt this was unfair. They held that they should earn extra credit for frontline service and party membership, and were supported by the Minister. Schanke’s attempts to introduce a system that favoured the NS students were met with violent protests. The entire university was up in arms.

“It crossed a line for what the compromisers could accept. However, there then arose quite a harsh conflict between the two factions within the resistance about the form of the ultimatum to the minister, and when it should be presented,” says Sem Fure.

In the mean time, Quisling decided it was time to show some muscle. In October 1943, he ordered the arrest of 60 students and ten professors. This was followed by several rounds of negotiation, until someone started a fire in the University Aula in the early hours of 28 November. The fire brigade was immediately called. Although not much damage was done, Terboven had had enough of the unrest at the University. He ordered its closure and mass arrests. Everything happened within the space of a couple of days.

It was a difficult and interesting moral dilemma that came to a head in 1943, according to Jorunn Sem Fure.

“How high a price is a struggle for ideals worth? If the outcome of the mass arrests and the deportations had been different, we might have different views today about what was the correct line to follow. Schjelderup and his followers felt compelled to take an absolute stance against Nazism, and they were willing to pay a high price. The question is who would have had to pay, and how much? What if hundreds of Norwegian students had died in German captivity because a handful of people wanted to make a point?”

In late summer 1945, normal examinations were once again held at the University of Oslo.