The Observatory’s meridian circle: determining the zero meridian and the coordinates of the heavenly bodies

The inscription on the Observatory’s foundation stone laid in 1830 reads “Et nos petimus astra” – we too seek the stars. 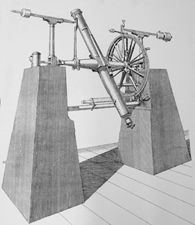 The young nation was now aiming to achieve the same level as the great cultural nations in Europe.
Reaching for the stars was both an intellectual ambition and an acknowledgement that Norway would have to be built using modern knowledge and technology. The goal was to be accepted as a serious international player.

Hansteen acquired a meridian circle for the Observatory – an astronomy telescope for observing the stars as they passed the meridian. The times were determined using the most accurate pendulum clock in Norway, which stood on its own plinth in the Meridian Room. All the equipment was manufactured overseas and was the best that existed at the time. It was used by Norwegian astronomers for 100 years. These observations formed the basis for the official Norwegian time signal right up until 1923.

It took several years to calibrate the instrument precisely. Once it was calibrated, Hansteen and his assistants observed the stars for more than 10 years in order to determine the exact position of the Observatory with the same degree of accuracy as was common abroad. When they finished this work in 1847, Norway was finally positioned on the globe. The coordinates indicated the location in relation to Copenhagen, Paris, Greenwich and other leading observatories in Europe. Norway had received its own zero meridian – a starting point for all further surveying and mapping of the country. All geodetic surveying and mapping in Norway was based on this zero meridian right up until satellite measurements took over some 150 years later. 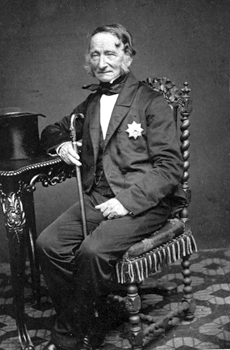 This astronomy telescope could also determine coordinates in the sky. When the planet Neptune was discovered in Berlin on 23 September 1846, it took less than a month before the news reached Oslo and observator Carl Fredrik Fearnley was able to make his first observation. Over the course of six weeks, he determined the coordinates 14 times while Neptune was only 16 degrees above the southern horizon, and the results were promptly published in Germany. Observatories all over the world helped to calculate Neptune’s path and confirm that the planet was part of our solar system.

Over the next 20 years, similar observation programmes were carried out for many asteroids and comets. There were often major differences in asteroids’ paths, but it was established time and again that they always lay between the planets Mars and Jupiter. By contrast, comets had elongated paths that took them close to the outer limits of the solar system with orbits of several thousand years.

In 1870, the Observatory in Oslo joined an international collaboration project to determine the exact position of thousands of stars. The sky was divided up into sectors and assigned to the individual participating observatories. The Observatory in Oslo was to measure all the stars between declination 65º and 70º, since it was so far north. In this context, the meridian circle was upgraded technically and precisely calibrated. Professor Fearnley and observator Hans Geelmuyden then made observations every clear night for eight years. Geelmuyden processed the data and compiled a list of stars that required greater accuracy. They then continued their observations for another two years, before publishing the catalogue of stars in 1888.

Two years later, Jens Frederik Schroeter became an observer. He compared the positions recorded in the Oslo catalogue with previous works from other observatories, and discovered 285 new stars that had no fixed position. He observed them again using the meridian circle to determine the speed and direction they were moving in Space. 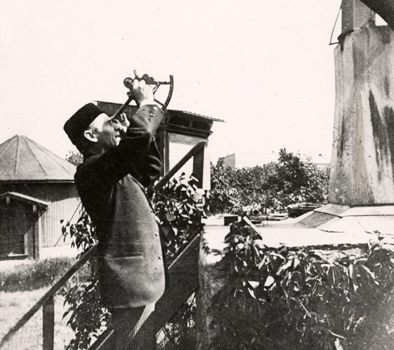 Geelmuyden with a sextant outside the Observatory. Photo: Carl Størmer

In 1897, professor Geelmuyden and observator Schroeter started a new series of observation of all the stars in the Oslo catalogue. The meridian circle underwent another technical upgrade, and measurements continued to be taken until 1905, with additional observations in 1906–7. Schroeter processed the data and the results were published as a new catalogue of stars in 1909. He then studied the proper motion of all the stars in the two catalogues and published his findings in 1912.

Throughout this period, the specific celestial coordinates for comets and asteroids were also determined. When the asteroid Eros passed near the Earth in 1900, it was observed from many observatories around the world, including Oslo, because it was possible to read the distance between the Earth and the sun more accurately than before. This set the scale for our entire solar system.