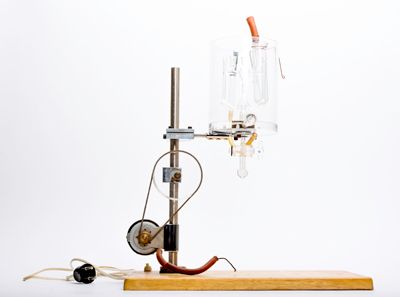 Norwegian–Swedish Per Fredrik Scholander had studied medicine, but switched to biology in the 1930s. His doctoral thesis, from 1934, was on vascular plants in Svalbard. On his journeys to Arctic regions, Scholander became interested in how seals could dive for such a long time. In the basement of the Department of Physiology in Domus Bibliotheca, Scholander started doing research on seals. At that time, the University did not yet have a separate unit for physiological research on animals.

Scholanders’ research would reflect his interest in the way animals and humans adapt to Arctic regions, compared with warmer regions, for many years to come. Scholander was a brilliant scholar, and in 1939, a Rockefeller scholarship took him to the USA. At Swarthmore College in Pennsylvania, he developed an apparatus for measuring metabolism in air-breathing animals: called the Scholander 0.5 cc gas analyser, which provided an accurate analysis of animals’ respiratory gases.

From the U.S. Army Air Force to Alaska

The first 0.5 cc gas analyser was completed before Scholander left Swarthmore College in 1943. The main part of the apparatus is a complex glass part, which was made by the talented American glassblower Jimmy Graham. This was in the middle of the Second World War, which also affected biologists in the USA. From 1943, Scholander served as a research officer in the U.S. Army Air Force, developing and testing survival equipment. In the second half of the 1940s, he was based in Alaska, but also had several stays in Panama. He compared metabolism in cold and hot climates.

Scholander developed several instruments to enable him to conduct research in areas such as circulatory changes in animals that dive, regulation of body temperature, human and animal adaptation to cold, gas exchange and metabolism, and fluid intake in plants and trees. One instrument is called the “Scholander pressure bomb”.

The instrument in use

To Oslo with instruments in his trunks

Naturally, Scholander brought the instruments he had developed with him when he came to the University of Oslo to head the newly formed Department of Zoophysiology. The oldest Scholander 0.5 cc gas analyser in the Department’s collections is one he brought with him from the USA. The Department’s chief technician, Odvar Iversen, quickly started making more. However, Scholander continued to import analysis chambers made by the glass blower Graham. Indeed, he even “imported” Graham to Norway for a period of time to hold courses for the glassblowers in the ZEB building (home to zoophysiology, nutrition and biochemistry) and at the Central Institute for Industrial Research (SI), with which he collaborated.

Per Enger, who would later become head of department, was a second-degree student when Scholander came to the department. He joined Scholander on an expedition to Panama in 1955, where he performed a series of analyses using the 0.5 cc gas analyser to supplement Scholander’s previous research on heat regulation in animals. Experienced users could do an analysis in 5–10 minutes, according to Enger. Back in the Department, second-degree students were trained to use the Scholander 0.5 cc gas analyser throughout the rest of the 1950s in connection with work on metabolism. The instrument stopped being used in the 1960s.

Zoophysiology moved to the Kristine Bonnevie Building, along with the other life science subjects, a long time ago. The various parts of the Scholander 0.5 cc gas analyser have been stored here and there in the current Department of Biosciences (IBV). However, now that IBV and the Museum of University History (MUV) are building up a joint magazine for historically interesting objects, everything has been brought together in one place. Per Enger and Kjell Fugelli, who have been in the zoophysiology environment since the 1950s, have reassembled the instruments, read Scholander’s old publications, and remembered how the instruments were used.

These items are steeped in history. They provide insight into the life and work of an exceptionally innovative researcher who chose to leave poor post-war Norway after just three years, as well as the history of a new department. They also bear witness to early interdisciplinary collaboration, inspiration and, not least, the importance of good instrument makers.

The main source has been talks with retired assistant professor Kjell Fugelli and professor emeritus Per Enger. Enger has been at the Department of Zoophysiology since its establishment, and Fugelli almost as long.